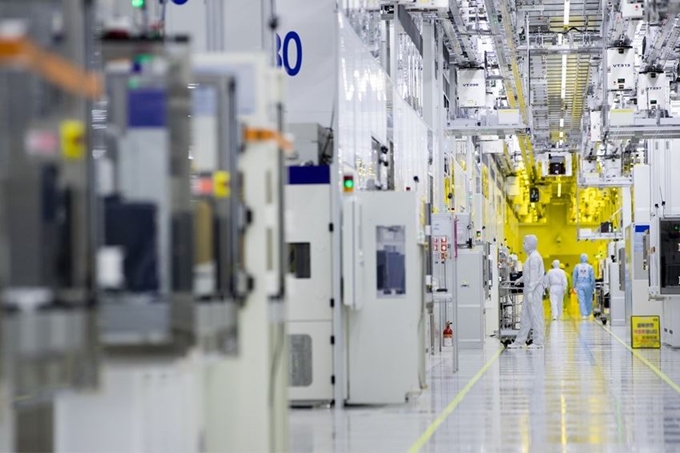 Since July 4, Japan tightened regulations on exports to South Korea of resist, etching gas and fluorinated polyimide — essential for the production of semiconductors and flexible displays — in an escalating standoff with South Korea over their shared history.

The curbs have prompted Samsung Electronics, the world’s largest memory chip maker, and its smaller rival SK hynix Inc. to try to find alternative supplies of the key industrial materials.

“The test of etching gas could take about 40 to 50 days before making an assessment” whether non-Japanese etching gas can be used in making semiconductors, the source said.

He asked not to be identified and did not elaborate details of non-Japanese etching gas.

He also said that the testing does not necessarily mean that non-Japanese etching gas can be applied in making semiconductors.

Currently, there is no alternative source for resist other than Japanese ones, he said.

A SK hynix official declined to comment on whether the company has begun testing an industrial material.

South Korea — home to Samsung Electronics and SK hynix — accounted for more than 60 percent of the global memory market in 2018. 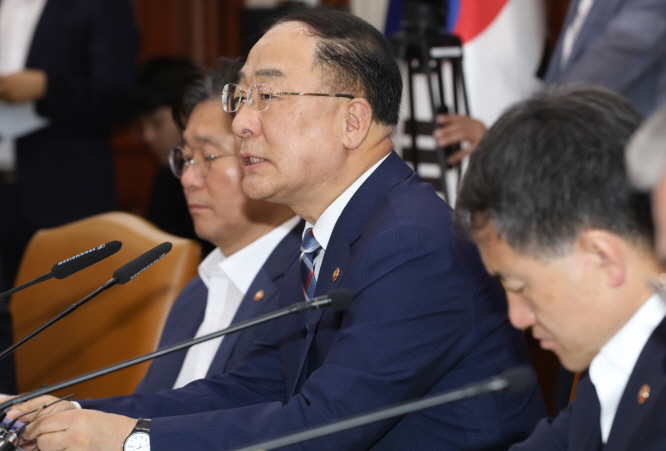 Hong Nam-ki (2nd from R), minister of economy and finance, speaks in a meeting with officials at a government building in central Seoul on July 17, 2019. (Yonhap)

The government plans to expand tax benefits to research and development spending to cope with the Japanese export restrictions.

Hong said Japan’s export restrictions could undermine the foundation of the two sides’ economic cooperation, and are not desirable for the global economy.

“The Japanese move could further weaken a global value chain beyond South Korea-Japan relations, which in turn could hurt global economic growth,” Hong said in a meeting with officials at a government building in central Seoul.

Japan has lashed out at the ruling, claiming that all reparation issues stemming from its colonial rule were settled under a 1965 government-to-government accord that normalized bilateral relations.

The standoff has plunged Seoul-Tokyo relations to their lowest levels in recent decades.

The issue has been named a formal agenda item of the World Trade Organization’s General Council, the highest decision-making body of the WTO, in Geneva. The council is set to discuss the issue on July 23 and 24.

The Ministry of Trade, Industry and Energy sent a letter to its Japanese counterpart on Tuesday, calling for talks between their director-generals on the Japanese export curbs.

“We are ready for talks with Japan if Tokyo wants to raise the issue of South Korea’s catch-all system for conventional weapons and to present evidence,” Park Tae-sung, deputy minister for trade and investment at the ministry, said in a briefing.

Japan has raised suspicions that South Korea might have been negligent in the management of some dual-use items affected by United Nations resolutions against North Korea, a charge denied by South Korea.

Last week, South Korea and Japan held working-level talks in Tokyo, and Japan said it has no intention of lifting export curbs against South Korea.