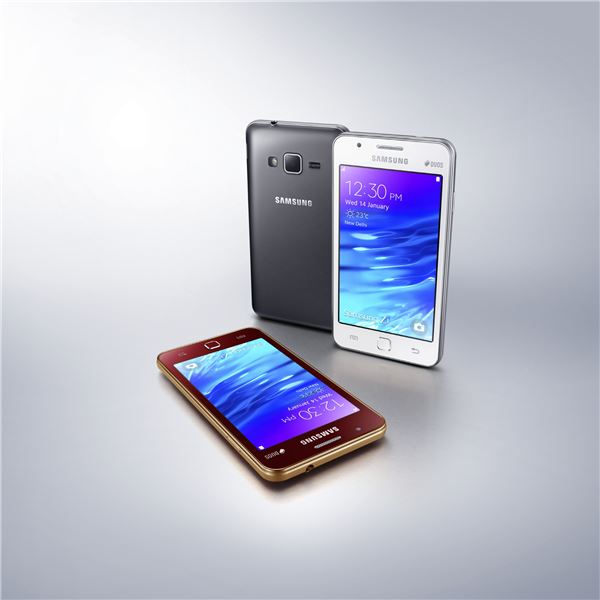 Samsung Electronics Co. said Wednesday it has launched its first Tizen-powered smartphone in India as it aggressively targets the low-end market and attempts a breakaway from the dominant Android operating system. (image: Samsung Electronics)

SEOUL, Jan. 14 (Korea Bizwire) — Samsung Electronics Co. said Wednesday it has launched its first Tizen-powered smartphone in India as it aggressively targets the low-end market and attempts a breakaway from the dominant Android operating system.

The 4-inch Samsung Z1 is powered by the Tizen 2.3 platform and comes with a 1.2GHz dual-core processor. Weighing only 112 grams, it is equipped a 3.1-megapixel rear camera and a 1,500 mAh battery. It will come in white, black, and red.’

Although its features are not on par with the Android-powered Galaxy S5, which is armed with a 16-megapixel camera and 2,800 mAh battery, the price tag on the Samsung Z1 is lower at 5,700 Indian rupees (US$91.75), a factor that could help the tech giant’s bid to recoup market share.

“Based on the Tizen platform, the booting and application speeds have increased, and improved Internet features also load Web pages faster, allowing users to reduce data consumption,” Samsung said in its release.

The world’s No. 1 maker of smartphones said the Samsung Z1 will provide customized services to Indian users, providing them with free contents covering music, movies, mobile TV and radio.

The smartphone will come with “Club Samsung,” which provides 70 TV channels live and some 230,000 music contents.

Samsung said it has not decided whether to release Tizen smartphones in other countries.

Tizen is an open-source operating system for smart devices being promoted by Samsung, Intel, Huawei and other global tech players. Samsung has been playing a leading role in its development, applying it in some of its wearables such as Gear smartwatches.

There have been rumors about the release of a Tizen-powered smartphone since 2013. Japan-based NTT Docomo Inc. planned to release a Tizen handset last year but delayed the plan, saying that the Japanese market is not large enough to have three operating systems.

The operating system again came under the spotlight this year after Samsung showcased Tizen-powered smart televisions at the U.S. Consumer Electronics Show earlier this month.