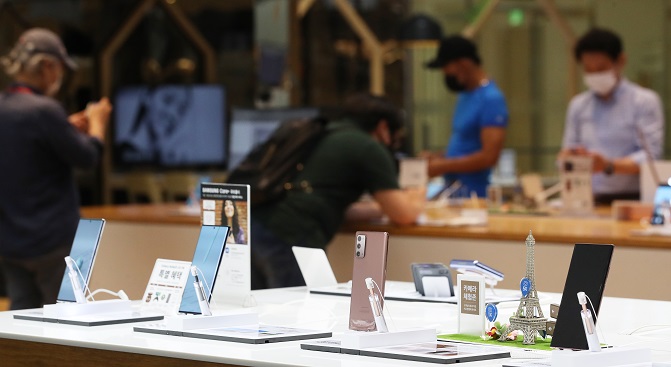 In this file photo taken on Aug. 7, 2020, Samsung Electronics Co.’s Galaxy Note 20 smartphones are displayed at a store in Seoul. (Yonhap)

SEOUL, Jan. 28 (Korea Bizwire) — Samsung Electronics Co. dropped to the second spot in the global smartphone market in the fourth quarter of 2020, a report showed Thursday, as Apple Inc. outshined other companies on the back of its new iPhone 12 series.

Samsung shipped 73.9 million smartphones in the October-December period, up 6.2 percent from a year earlier, for a market share of 19.2 percent, according to market researcher International Data Corp. (IDC).

Apple was the top performer in the fourth quarter after shipping 90.1 million iPhones, up 22.2 percent from a year ago, capturing a market share of 23.4 percent. Its fourth-quarter shipment volume was the largest-ever for any vendor in a single quarter.

In the IDC’s data for the third quarter, Samsung was the leading smartphone vendor with a 22.7 percent market share, while Apple was in fourth place.

China’s Xiaomi Corp. maintained its status as the third-largest player with an 11.2 percent market share after shipping 43.3 million smartphones in the fourth quarter, up 32 percent from a year ago.

Its Chinese compatriot OPPO came in fourth with an 8.8 percent market share with shipments of 33.8 million smartphones.

Huawei Technologies Co. dropped to the No. 5 spot from the runner-up position after shipping only 32.3 million smartphones in the fourth quarter, down 42.4 percent from a year earlier, due to U.S. sanctions.

For the entire year of 2020, the worldwide smartphone market contracted 5.8 percent from 2019 due to the COVID-19 pandemic, but IDC said the market recovery has been “impressive” and the growth momentum is likely to continue in 2021.