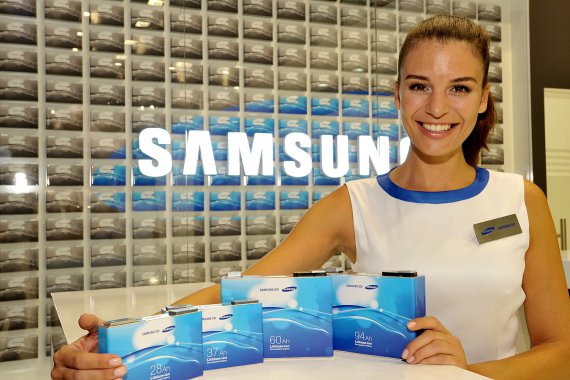 Samsung SDI announced that it joined the 2015 International Motor Show (IAA) in Frankfurt as a supplier of batteries for EV and other car parts. (image: Samsung SDI)

SEOUL, Sept. 15 (Korea Bizwire) – Samsung SDI, the battery-making unit of Samsung Group, will expand its foothold in the electronic vehicle (EV) market in Europe by participating in the Frankfurt Motor Show that kicked off today.

Samsung SDI announced that it joined the 2015 International Motor Show (IAA) in Frankfurt as a supplier of batteries for EV and other car parts. Its subsidiary, Samsung SDI Battery Systems (SDIBS), which Samsung SDI acquired from German auto parts supplier Magna last May, also joined the motor show.

At the motor show, Samsung SDI is exhibiting not only its full lineup of battery cells, but also standardized modules which can be applied to both PHEV and pure EV, and a high performance pack developed by SDIBS.

Of note, it will show off its expertise by exhibiting a new “low pack”, which features a lower battery pack that was achieved using technology from SDIBS.

Among the global battery makers for EV, Samsung SDI is the only participant at the show, and expects more sales orders from European automakers.

Since 2009, Samsung SDI has participated in more than 30 projects related to EV batteries, with the majority of the projects coming from European automakers including BMW and Audi.

An official at Samsung SDI said, “At the Frankfurt Motor Show, we will introduce our technology roadmap and various solutions to global automakers. By improving battery technology, we will lead innovation in the mileage of EVs.”