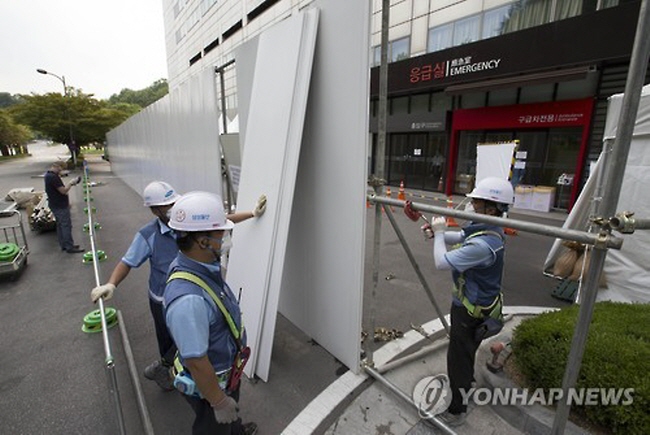 Samsung Seoul Hospital is forcing its current patients and those with scheduled appointments to move to other hospitals or reschedule, except when they require special treatment. (image: Yonhap)

SEOUL, Jun. 16 (Korea Bizwire) – As Samsung Seoul Hospital announced a partial shutdown due to the further spread of the MERS virus on June 15, an exodus of patients to other hospitals in the district has begun.

Samsung Seoul is forcing its current patients and those with scheduled appointments to move to other hospitals or reschedule, except when they require special treatment.

On June 15, the number of admitted patients or patients with appointments was 5,300.

Large hospitals in the district are increasingly receiving inquiries about patient transfers since the announcement of the shutdown.

Gangnam Severance Hospital announced on June 15 that it would selectively receive patients from Samsung Seoul based on the characteristics of their treatment at the hospital, as they have limited facilities required for the isolation of patients.

Currently, all patients from Samsung Seoul have been ordered into isolation.

Seoul St. Mary’s Hospital also announced that it would receive patients from Samsung Seoul, however, it will not accept patients who show symptoms of the virus, and will lead them to other hospitals with isolated patients.

Seoul Asan Hospital said that it would not selectively receive patients, saying that it would accept all patients regardless of their time in Seoul Samsung.

However, as Seoul Asan is already full of booked patients for now, a hospital individual said that it would take several days for the patients to transfer.