SEOUL, Feb. 12 (Korea Bizwire) — Samsung Electronics Co. has doubled down on its move to expand the presence of foldable form factors in the smartphone market as the company introduced its second foldable handset at a relatively competitive price.

The Galaxy Z Flip made its debut at the Galaxy Unpacked 2020 event in San Francisco, alongside Samsung’s new flagship, the Galaxy S20 series, on Tuesday (U.S. time).

The Galaxy Z Flip is Samsung’s second foldable phone after the Galaxy Fold that was launched last year, but the two share little in common.

“The Z Flip is a statement smartphone,” said Rebecca Hirst, who heads UK mobile product marketing at Samsung. “It is for trendsetters and trailblazers.”

Unlike the Galaxy Fold that opens horizontally like a book, Samsung’s latest foldable handset bends in half vertically, making it portable enough to fit into a pocket.

The mobile device, equipped with two 12-megapixel rear cameras, comes with a 6.7-inch foldable main display and a 1.1-inch cover display on the front of the handset that allows users to check the time and other notifications.

Samsung said the Galaxy Z Flip offers smooth multitasking abilities since users can split the screen into two parts and push content to the top screen.

Users can also lock the screen at a 90 degree angle, which makes the bottom half of the phone act as a kickstand and helps when video chatting.

The featured specs of the Galaxy Z Flip may be a little outdated, but industry watchers said the phone’s clamshell design and competitive pricing could attract more customers than its predecessor. 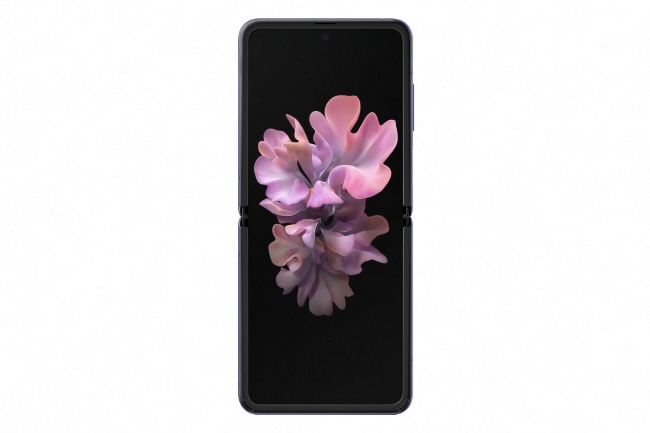 The Galaxy Fold, which officially went on sale in September, was estimated to have reached between 400,000 and 500,000 units in sales last year.

Samsung said the Galaxy Z Flip, which will be only available in 4G, will sell for 1.65 million won (US$1,392), roughly $600 down from that of the Galaxy Fold and cheaper than its direct rival, Motorola Inc.’s Razr, a vertically folding phone that was priced at $1,500.

While the price still looks high for a mobile device, industry insiders said the cost of the Galaxy Z Flip is in line with that of other high-end handsets, such as Samsung’s new Galaxy S20 Ultra and Apple’s iPhone 11 Pro Max.

For those who want more uniqueness and exclusivity from owning a foldable device, Samsung is also offering a limited edition of the Galaxy Z Flip in collaboration with U.S. fashion brand Thom Browne.

While most smartphone makers don’t even have one foldable device yet, Samsung has better positioned itself to take the lead in the foldable phone market with two different foldable handsets now available on the market.

According to data from marker research Strategy Analytics, global foldable smartphone shipments were under 1 million units in 2019, but they are expected to grow to 8 million units this year and 100 million by 2025.

Industry observers speculated that Samsung may up the ante in the foldable market by releasing the next generation of the Galaxy Fold handset in the second half.

“With its technological prowess in the foldable phone sector and ability to apply different form factors, Samsung can set up a unique foldable lineup that can meet various consumer demands.”