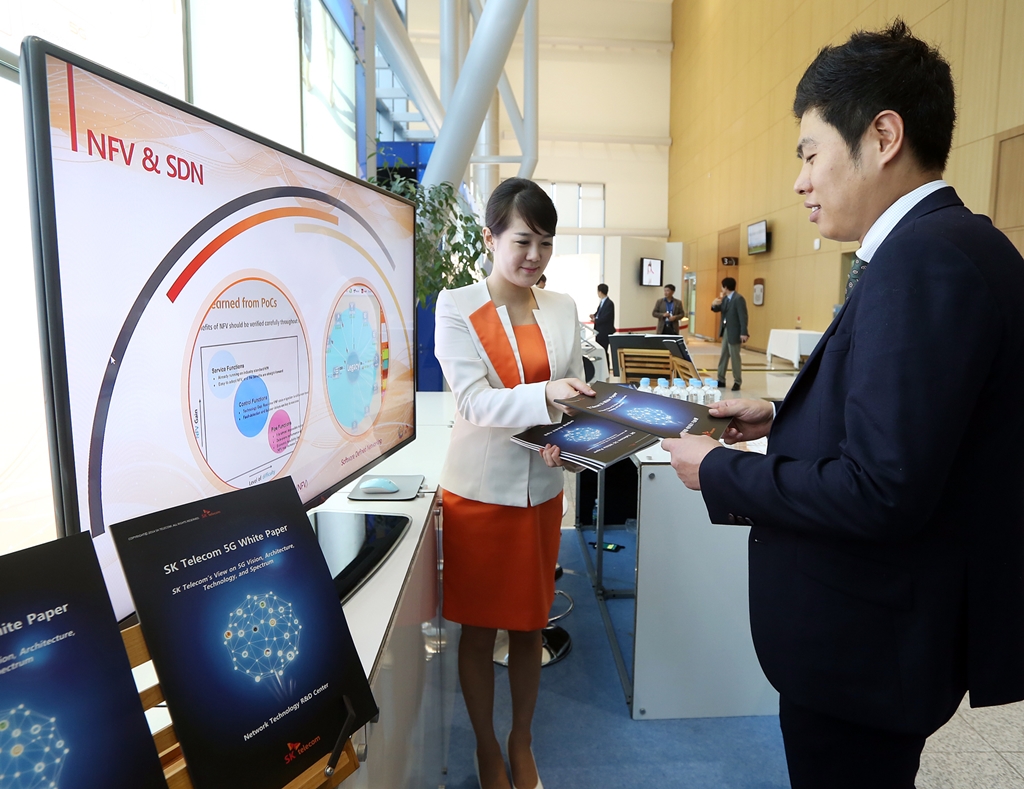 A employee of SK Telecom is introducing a white paper on 5G to visitors at the company’s booth during 5G Global Summit, an international 5G conference, held in Busan last year. (image credit: SK Telecom)

Samsung and SK Telecom will showcase the so-called millimeter wave technology, which boasts a speed of 7.55 gigabit-per-second (Gbps) on the 30-300 GHz band. Current communications networks use bands of below 6GHz.

The speed will mark a 100-fold leap from the download speed of 75Mbps posted in 2011 through the long-term evolution (LTE) network. It is also nearly two times faster than the 3.77Gbps speed showcased by Samsung and SK Telecom in the World IT Show held in October last year.

“Technology firms are seeking to tap the millimeter-wave band as spectrums below the 6GHz-level are quickly being occupied,” SK Telecom said. The 30-300 GHz bands had been considered inappropriate for long-distance communications due to propagation losses.

SK Telecom said it has adopted the so-called 3D Beamforming technology, which uses a high-end antenna to control the direction of radio waves, preventing such losses.

Samsung and SK Telecom added the two will expand joint studies on the latest network, and seek to become the world’s first to commercialize 5G technologies.

“Samsung Electronics has built the most advanced 4G LTE telecommunications infrastructure in the world by working closely with other Korean companies,” Samsung said. “We will continue to lead the global mobile industry by focusing on the development of 5G technologies through strengthened cooperation with our partners.”

The MWC will run in Barcelona, Spain, from March 2-5.