SEOUL, May 31 (Korea Bizwire) — Samsung Electronics Co. maintained the second spot in the foundry market in the first quarter of the year, but its share fell slightly due to the temporary shutdown of its chip plant in the United States, a report showed Monday.

Samsung’s foundry business logged a market share of 17 percent in the January-March period, down from 18 percent a quarter earlier, after its revenue dropped 2 percent to US$4.108 billion, according to the latest report from industry tracker TrendForce.

“This February, a freak winter storm in Texas caused power outages in Austin and forced Samsung to temporarily shut down its fab Line S2 that was located in the vicinity,” TrendForce said.

“The suspension of wafer input at the fab for almost a whole month caused Samsung to become one of the very few foundries that posted a revenue drop for 1Q21.”

Samsung, also the world’s largest memory chip producer, earlier said it suffered more than 300 billion won (US$270 million) in damage due to a wafer production disruption at its Texas plant.

Taiwan Semiconductor Manufacturing Co. (TSMC) raised its dominant market share by 1 percentage point to 55 percent in the first quarter with revenue of $12.9 billion, up 2 percent from the last three months of 2020.

“The revenue from the 7nm foundry service has kept climbing at a stable pace thanks to orders from AMD, MediaTek, and Qualcomm, registering a QoQ increase of 23 percent for 1Q21.” 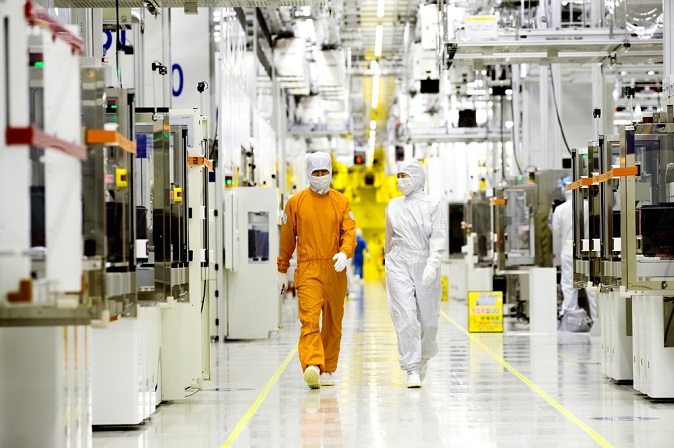 Two employees of Samsung Electronics Co. check equipment of the clean room of its semiconductor production facility in this photo provided by the company on May 15, 2019.

Another Taiwanese chipmaker, United Microelectronics Corp. (UMC), took the No. 3 spot in the foundry market with a 7 percent share, with its revenue increasing 5 percent quarter-on-quarter to $1.67 billion.

The quarterly total revenue of the top 10 foundries rose by 1 percent quarter-on-quarter to a record high of $22.75 billion in the first quarter, according to TrendForce.

“Owing to soaring demands for various end devices, manufacturers have been ramping up their component procurement activities, and foundry capacities, as a result, have been in shortage since 2020, with various foundries raising their wafer prices and adjusting their product mixes to ensure profitability,” it said.

The market researcher predicted that the total revenue of the top 10 foundries will likely reach a new high with a 1-3 percent increase expected in the second quarter of the year.

“There has been strong demand for most types of components in 2Q21, meaning foundries will maintain fully loaded capacities going forward,” it said.