Samsung has been actively promoting its latest nanometer fab technology based on extreme ultraviolet lithography (EUV), in hopes of catching up to Taiwan’s TSMC, which holds an over 50 percent share of the global foundry market. (image: Samsung Electronics)

SEOUL, Apr. 24 (Korea Bizwire) — Samsung Electronics Co. said Wednesday it will invest 133 trillion won (US$115.7 billion) by 2030 to expand its non-memory and foundry business to take the top spot in the high-tech and lucrative sector.

The world’s largest memory chip maker announced measures to develop the semiconductor ecosystem with increased investment for the foundry and non-memory segment to diversify its portfolio.

“The investment plan is expected to help the company reach its goal of becoming the world leader in not only memory semiconductors but also logic chips by 2030,” Samsung said in a release. “The company also plans to create 15,000 jobs in R&D and production to bolster its technological prowess.”

The tech giant said it will step up collaboration with small and medium-sized companies as well as universities and research labs to develop emerging technologies and train professionals in the industry.

The latest move also comes as the government has vowed to expand support for the semiconductor industry to reduce the nation’s heavy reliance on the memory chip business and better fend off challenges by rising Chinese manufacturers.

Samsung has been actively promoting its latest nanometer fab technology based on extreme ultraviolet lithography (EUV), in hopes of catching up to Taiwan’s TSMC, which holds an over 50 percent share of the global foundry market. 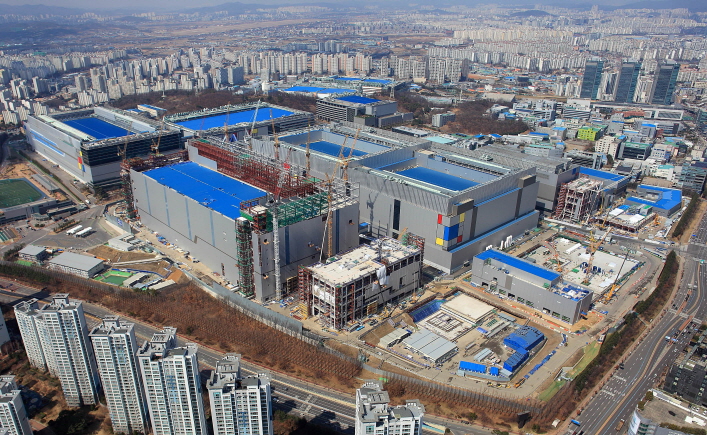 On Tuesday, Tesla gave its first, detailed glimpse of its new full self-driving chip designed by itself and manufactured in Samsung’s fab in Austin, Texas.

Telsa claimed its latest chip offers much better performance than the Nvidia chips it was using before.

Some market watchers have also raised expectations Samsung may be a potential provider of 5G solution for Apple’s iPhones, along with U.S. chip giant Qualcomm.

Samsung has been producing 5G solutions for the latest premium mobile devices, including the Galaxy S10 5G, as the company seeks to expand its presence in the next-generation wireless business.