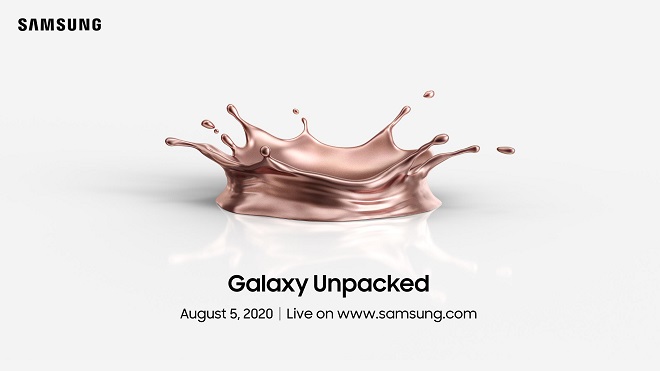 This image provided by Samsung Electronics Co. on July 8, 2020, shows its online invitation for the Galaxy Unpacked event.

SEOUL, July 8 (Korea Bizwire) — Samsung Electronics Co. on Wednesday confirmed its new smartphones will be unveiled next month through an online event.

Samsung said the Galaxy Unpacked 2020 will take place on Aug. 5, with livestreaming of the event starting at 10 a.m. (Eastern Time).

The South Korean tech titan usually holds the event in New York every year but opted to go online due to the novel coronavirus pandemic.

Samsung is widely expected to introduce a handful of new mobile devices, including its flagship phablet Galaxy Note 20 series.

The standard Note 20 is projected to have a 6.4-inch display, while the high-end Note 20 Ultra is rumored to feature a 6.9-inch panel.

In South Korea, the Galaxy Note 20 is expected to be launched on Aug. 21, with preorders likely to be available as well, according to the sources.

Samsung is expected to introduce two foldable handsets, the Galaxy Fold 2 and the 5G variant of the Galaxy Z Flip, at the event.

Foreign tech reviewers have predicted that the Galaxy Fold 2 will feature a 7.7-inch screen when unfolded, while having a 6.23-inch cover display, both larger than its predecessor’s 7.3-inch and 4.6-inch displays, respectively.

The 5G version of the Galaxy Z Flip, Samsung’s clamshell-type folding phone, is not expected to have major changes in specifications from its original LTE model launched in February.