SEOUL, Feb. 3 (Korea Bizwire) — Samsung Electronics Co.’s foundry capacity share in legacy nodes is estimated to rank fourth in 2021, a report showed Wednesday, amid its push to increase its presence in the contract chipmaking sector with advanced fabrication processes.

Samsung, the world’s largest memory chipmaker, was projected to account for 10 percent of global foundry capacity in matured nodes, which refers to the 40-nanometer and below chipmaking technology process, according to market researcher Counterpoint Research.

Though its capacity ranks fourth, Samsung has been the world’s No. 2 foundry firm behind TSMC in terms of revenue as the South Korean tech giant focuses on advanced chip processing nodes.

Samsung and TSMC are currently the only two chipmakers that can mass-produce chips with 7-nanometer (nm) nodes and below.

According to market researcher TrendForce, Samsung’s revenue share in the global foundry market in 2021 was estimated at 18 percent, while that of TSMC was projected to reach 54 percent.

The global foundry market was expected to grow 6 percent on-year to US$89.6 billion in 2021.

Industry watchers said that 2021 may be the starting year for a big capital investment cycle in the foundry industry, with growing demand for chips for high-performance computing (HPC) and next-generation networks.

“From 2021 to 2023, leading foundries are likely to undergo a cycle of massive equipment investment,” Counterpoint Research said.

“TSMC, Samsung and Intel will remain the leaders in capital spending, all setting up their new lines locally as well as in the U.S.” 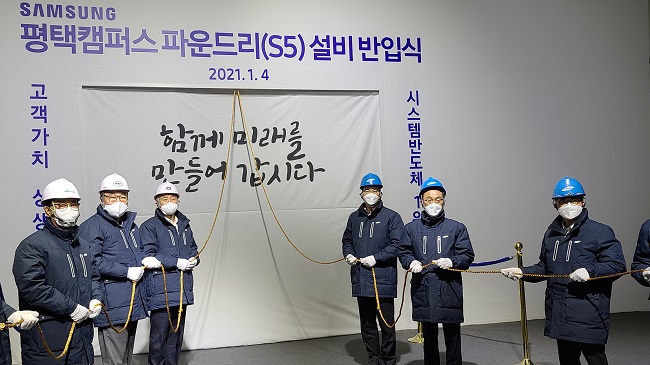 In recent years, both TSMC and Samsung have been trying to add extreme ultraviolet (EUV) lithography equipment from ASML Holding N.V. to boost their capacity for advanced processes.

Counterpoint Research estimated that TSMC will accumulate about 90 EUV tools by the end of 2022, while Samsung will acquire between 45 and 50.

Despite aggressive capital expenditures, market watchers said a supply shortage in the foundry industry is not likely to be solved in the near term.

“Looking ahead from the second half of 2021 to 2022, both TSMC and Samsung have made plans to aggressively expand their 5nm capacities in response to their HPC clients’ high demand for components in 2022,” TrendForce said.

“TrendForce believes that production capacities for advanced processes will once again be in severe shortage in 2022 given the rapid growth of the HPC market and the increased orders from Intel, which is accelerating the outsourcing of its production.”