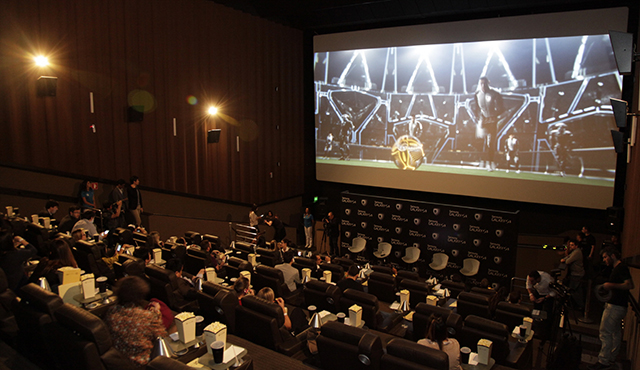 Samsung Electronics released the first episode of the highly anticipated “Galaxy 11: The Match” video after months of fan speculation and excitement around the outcome of the “winner takes the Earth” match. (image credit: Samsung Electronics)

SEOUL, Korea, Jun. 10 (Korea Bizwire) – Samsung Electronics Co., Ltd. released the first episode of the highly anticipated “Galaxy 11: The Match” video after months of fan speculation and excitement around the outcome of the “winner takes the Earth” match. In addition to the video being available to fans around the world to enhance their excitement for football this summer through the latest smart phone technology, fans in Brazil can enjoy the complete Galaxy 11 experience in person at the Galaxy 11 World Tour Studio in Sao Paulo.

Beginning last fall, fans worldwide have been captivated by the story of Galaxy 11, engaging with the campaign across multiple platforms and tallying more than 110 million views of campaign videos. The Galaxy 11 is made up of 13 top-class football players from around the world attempting to save the planet from alien domination. Most recently, the Galaxy 11 participated in intense and rigorous training supported by the Samsung Galaxy S5, Gear 2 and Fit, and embarked on their journey to the final showdown.

“It’s been incredible watching the fan engagement and support of the Galaxy 11 campaign continue to grow immensely over the past few months, and we are excited for fans to enjoy the final, suspenseful match video,” said Younghee Lee, Executive Vice President of Global Marketing, IT& Mobile Communications Division at Samsung Electronics. “Galaxy 11 unites fans’ universal passion for sport and entertainment and we are happy to finally meet our fans at the Galaxy 11 World Tour Studio in Brazil as they play, capture and share their special moments around the football more broadly.”

“Galaxy 11: The Match” Video (Episode One)
The video begins with the team departing Earth, arriving to unfamiliar pitch conditions and diving into fierce competition against the aliens. Throughout the battle, Samsung’s latest Galaxy devices are used on and off the field by players and team manager Franz Beckenbauer to help the Galaxy 11 team navigate its massive and undefeated opponents, Hurakan. World-known football commentator Martin Tyler gives the exciting play-by-play and fans are left on the edge of their seat wondering if Galaxy 11 can overcome the aliens at the conclusion of the video at halftime.

Galaxy 11 Anthem
Fans can also enjoy the Galaxy 11 by watching the campaign anthem music video, “Football Will Save the Planet.” The music video combines highlights from Galaxy 11 videos and dramatic scenes from the final match against aliens. Noted music video director Chris Sims of DNA (Usher and Christina Aguilera) worked with famed choreographer Jamaica Craft to create the upbeat football “dance” for this summer.

The Match: Striker Soccer Galaxy 11 Mobile Game and Global Tournament
“The Match: Striker Soccer G11″ mobile game provides fans an exciting opportunity to play as the Galaxy 11 and take on the alien team. Fans who download the game can now join the global competition, with top countries receiving a sizable donation to benefit local youth football, including the search for the next generation of Galaxy 11. Eligible fans also have the chance to win prizes; for complete information, visit www.thegalaxy11.com/strikersoccer.

Galaxy 11 World Tour
First opened in April in London, the Galaxy 11 World Tour has brought the campaign to life for fans around the world, visiting Italy, the UAE, China, Malaysia, Vietnam, Nigeria and Argentina. The World Tour features Galaxy 11 player appearances and unique, interactive opportunities to get immersed in the campaign and enjoy the latest technology used by the Galaxy 11 team. The Galaxy 11 Word Tour is making its final stop in Sao Paulo from June 6 – July 13 to enhance the football experience for fans around the world traveling to Brazil over the next several weeks.