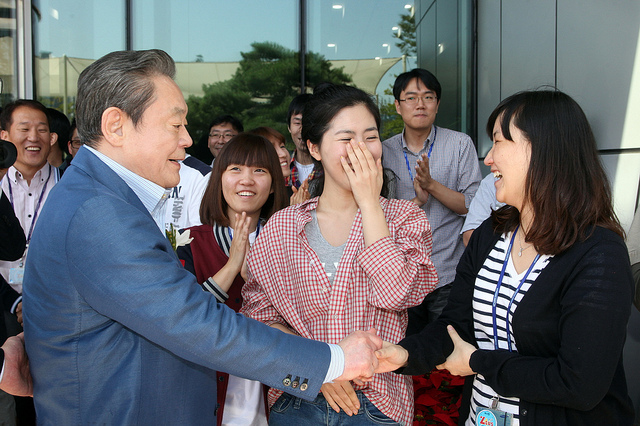 Media Samsung also posted a story on the Chairman’s recovery, saying, “One year has passed since Chairman Lee was hospitalized. As of May 8, he is in stable condition and undergoing steady rehabilitation.” (image: Samsung Electronics)

SEOUL, May 12 (Korea Bizwire) — On May 10, exactly one year after the hospitalization of Samsung Group Chairman Lee Kun-hee from a stroke, workers in Korea’s largest business group posted numerous get-well messages on Samsung’s intranet portal “My Single,” and its in-house media portal, “Media Samsung.”

In the login page of My Single, users uploaded words of encouragement like “We hope the Chairman gets well soon,” “We wish for your healthy return, Chairman Lee,” and “We hope to see you soon talking on a Galaxy S6.” These messages were shown on May 10 and 11.

Media Samsung also posted a story on the Chairman’s recovery, saying, “One year has passed since Chairman Lee was hospitalized. As of May 8, he is in stable condition and undergoing steady rehabilitation.”

One Media Samsung story wishing for a speedy recovery for Chairman Lee received a record 9,600 replies, demonstrating the strong support of the Samsung community.

On April 17 this year, one senior executive posted a reply saying, “Today is the 10,000th day since Chairman Lee assumed his role as the head of Samsung Group. I thank you for your effort in building Samsung into one of the world’s foremost companies.”

A new recruit added, “I joined Samsung this year. I really look forward to meeting you soon. I promise to work hard for the company and wait for the day you come back.”

An official at Media Samsung said, “All the more than 9,000 replies are different but they all express the sincere support of Samsung’s employees in wishing for Chairman Lee to return in good health.”