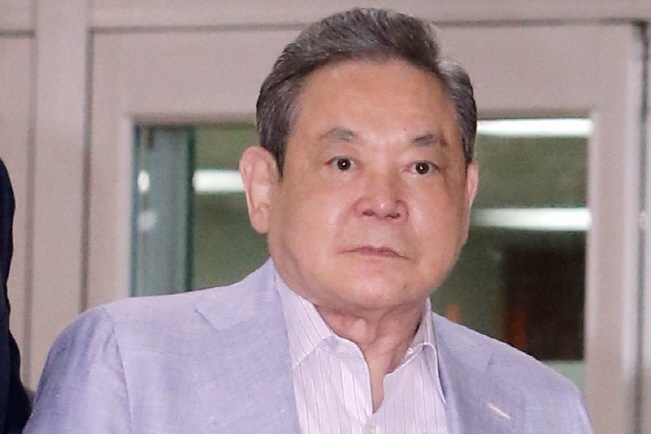 SEOUL, Dec. 31 (Korea Bizwire) — Lee Kun-hee, chief of South Korea’s top conglomerate Samsung Group, saw his stock value jump 30 percent this year to maintain his status as the richest shareholder in the country on the back of the robust performance of the group’s mainstay unit, Samsung Electronics Co., industry data showed Tuesday.

Lee held stocks worth 17.6 trillion won (US$15.1 billion) as of Monday, the final trading session of 2019, according to the report compiled by industry tracker CEO Score.

The business tycoon has been hospitalized since 2014 after suffering a heart attack.

The increase was mainly attributable to Samsung Electronics, which rallied some 45 percent this year on the main bourse.

Lee currently holds a 4.18 percent stake in Samsung Electronics, whose value is estimated at 13.9 trillion won.

He also has stakes in other Samsung affiliates, including a 20.76 percent stake in Samsung Life Insurance and 2.86 percent in Samsung C&T Corp., the de facto holding firm.

The second-largest shareholder in South Korea was Lee’s only son, Jae-yong, who held 7.3 trillion won worth of shares. The bedridden tycoon’s wife, Hong Ra-hee, stood in sixth place with a value of 3 trillion won.