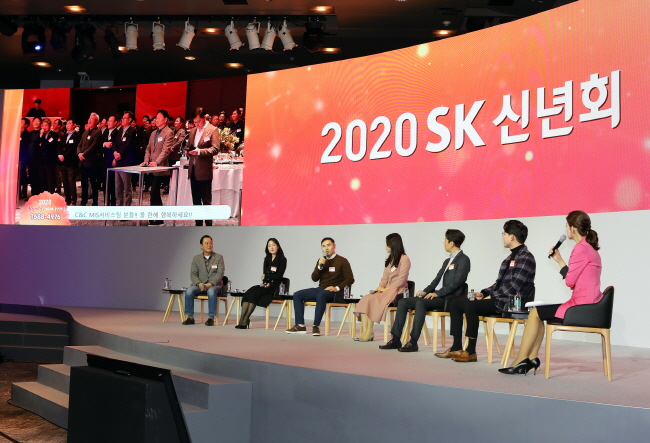 SEOUL, Jan. 3 (Korea Bizwire) — South Korean energy and telecoms conglomerate SK Group’s New Year’s meeting has been transformed into a venue that listens to the voices of various stakeholders without a traditional New Year’s address from the chairman.

SK Group held a New Year’s meeting at the Grand Walkerhill Seoul hotel on Thursday with about 600 employees, including Chairman Chey Tae-won and CEOs of major affiliated companies.

Before the New Year’s party, Chey expressed his belief in the company’s employees, saying, “All of you will do well without me”.

In fact, instead of executives announcing business goals for this year, SK took time to introduce wishes of restaurant workers near the headquarters building, institutional investors, young job seekers to the company through video footage.

This was followed by professors and civic group officials who spoke on the spot.

“I hope SK will nurture leaders who pursue social values in various areas and expand communities where they can collaborate,” said Heo Jae-hyung, CEO of Root Impact, which is a social venture support business.

At last year’s New Year’s party, CEOs of major affiliated companies had a heated discussion under the theme of “happiness” and which organized and concluded by Chey.

This year, however, there was a panel discussion in which a variety of members, from foreigners and women and new employees to executives participated.

The New Year’s party wrapped up with a new employee who participated in the talk program organizing the discussion on behalf of Chey and expressing his resolve for 2020.