The operating profit was estimated at 6.2 trillion won (US$5.45 billion) in the January-March period, a 60.4 percent drop from a year ago, according to its earnings guidance.

The tech giant expected overall sales to have fallen 14.1 percent on-year to 52 trillion won in the three-month period.

Samsung did not break down the performances of its respective business divisions, saying it will announce detailed earnings later this month.

The figures were below market expectations of 6.7 trillion won, based on the survey conducted by Yonhap Infomax, the financial arm of Yonhap News Agency on 28 South Korean brokerage houses. The sales estimate stood at 53.4 trillion won on average.

Its operating profit margin stood at 11.9 percent, the lowest since the third quarter of 2016. Earnings from memory chip sales accounted for over 70 percent of the total last year.

Market watchers expected downbeat earnings from its semiconductor business and losses in the display panel division for the first time since 2016.

Samsung is the world’s biggest producer of DRAM and NAND flash chips and supplies smartphone panels to Apple Inc., which has suffered tepid sales of iPhones in China.

The IT and mobile business were expected to have posted robust earnings on the back of the Galaxy S10, which went on sale last month. The flagship phone’s 5G model was launched in South Korea earlier in the day, targeting the premium segment.

During a shareholder meeting on March 20, DJ Koh, head of Samsung’s smartphone business, said the initial market reaction to the Galaxy S10 was “positive” in major markets including China and expressed hope for improved profitability from the division.

“Weak demand in the memory chip and display business are expected to have dragged down Samsung’s profits, while better-than-expected sales of the Galaxy S10 contributed to earnings in the IT and mobile division,” Choi Do-yeon, an analyst at Shinhan Investment & Securities, said.

“The market is expected to rebound after the second quarter when the inventory level at data centers goes down, which could lead to a rise in memory chip prices in the latter half of this year.” 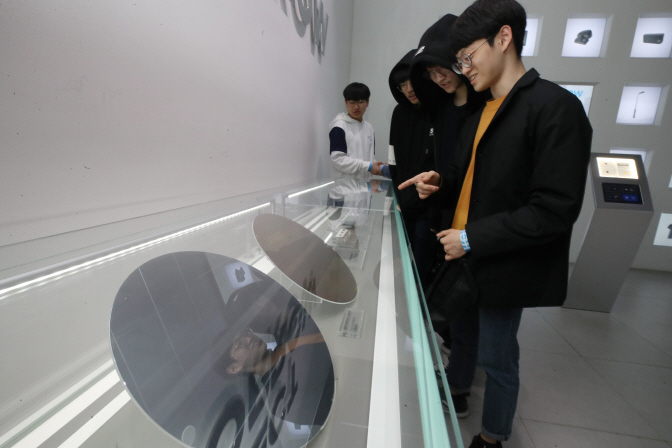 Visitors to Samsung Electronics Co.’s d’light, a global promotion and exhibition center inside its Seoul headquarters, look at a wafer, a thin slice of a semiconductor, on April 1, 2019. (Yonhap)

DRAM chip prices, mostly used in computer servers, fell more than 20 percent on average in the first quarter as major data centers are adjusting their high inventory levels of memory chips, market tracker DRAMeXchange said, seeing no rebound in the near term.

NAND memory, which is used in smartphones, was also hurt by slowing smartphone demand as more consumers wait longer to replace their handsets.

Some analysts pointed one-off costs of replacing some of its faulty DRAM products may have also eroded the profit margin in the memory division, already grappling with the unfavorable market environment.

“The one-off cost from an alleged defect in the first-generation 10 nanometer DRAMs for servers was expected to be reflected in the first-quarter earnings,” Song Myung-seop, an analyst at HI Investment & Securities, said in a April 1 note.

“Faulty DRAM products are a negative factor for the company’s earnings in the short term, but they could positively affect its shares in the long term by lowering the inventory level.”

Samsung declined to comment on the issue involving its clients.

Global ratings agency Fitch said the impact on Samsung from the downturn is likely to be smaller than for global peers because of its investments in advanced DRAM production capacity, which gives the company cost advantages during periods of weak margins.

“The downturn in the semiconductor sector that weighed on Samsung Electronics first-quarter results is likely to be less severe and shorter than previous cycles given production cuts, more diversified end-market applications and strong content growth,” Fitch said in a report.

“We believe that Samsung’s results are likely to recover towards the end of this year.

To tackle flattening smartphone demand and falling market share in China, Samsung is set to launch a foldable device in the coming months to target the premium segment.

In light of South Korea’s commercial 5G rollout, the tech behemoth is also seeking to expand its presence in the emerging communications market.

“Merger and acquisitions related to the 5G business are currently under way,” Koh said. “Samsung has end-to-end 5G solutions, ranging from equipment, devices and chipsets. We have been stepping up efforts to win equipment contracts in India, Japan, Europe.”

Share prices of Samsung, the top market cap on KOSPI, closed at 46,850 won on Friday, down 0.21 percent from the previous session.