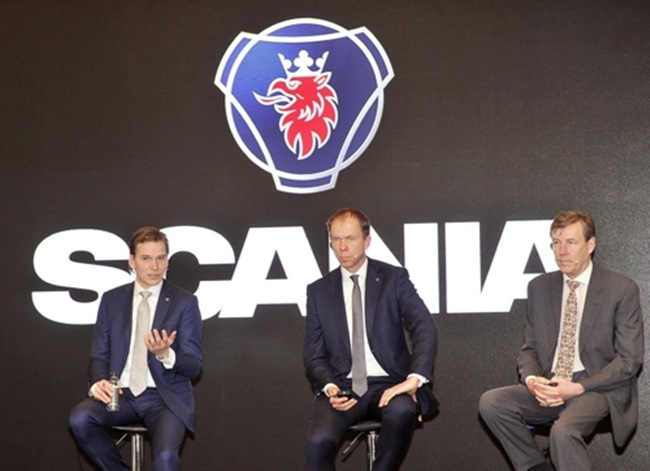 South Korea is the first Asian country to which the subsidiary of Volkswagen has introduced ‘All New Scania,’ Scania Korea said in a statement.(Image: Scania Korea)

SEOUL, Feb. 22 (Korea Bizwire) – Swedish truckmaker Scania on Thursday launched its first all-new truck model in South Korea in 20 years as it pushes to strengthen its presence in its “core” Asian market.

South Korea is the first Asian country to which the subsidiary of Volkswagen has introduced ‘All New Scania,’ Scania Korea said in a statement.

“The Korean market has been our most prioritized market in Asia for a while now,” Scania’s Executive Vice President Mathias Carlbaum in charge of the firm’s commercial operations said in a press briefing held in Seoul.

“Korea not only has the world-class technology but also is Asia’s leading country that has an extensive environmental regulation that will be the best place to fulfill Scania’s goals regarding sustainability.”

He said Scania will launch more fuel-efficient trucks to gain a bigger share in the Korean market, which is dominated by imported truck brands such as Volvo and Scania, both from Sweden, and Mann from Germany.

In the past four years, Scania has increased its share by an average of 1 percent each year in the Korean commercial car market where it has competed with Volvo and Mann, a company spokeswoman said.

Carlbaum also said Scania “definitely wants to be a part” of the journey, referring to the South Korean government’s high interest in autonomous commercial vehicles.

Scania said it will focus on providing a “sustainable transport solution” of the future for South Korea, its top priority market in Asia.

The sustainability at Scania is based on three pillars: energy efficiency, alternative fuels and electrification, as well as smart and safe transport, the statement said.

The company also said it plans to increase investments in Korea by expanding its service network to 30 centers by 2023 from the current 22.