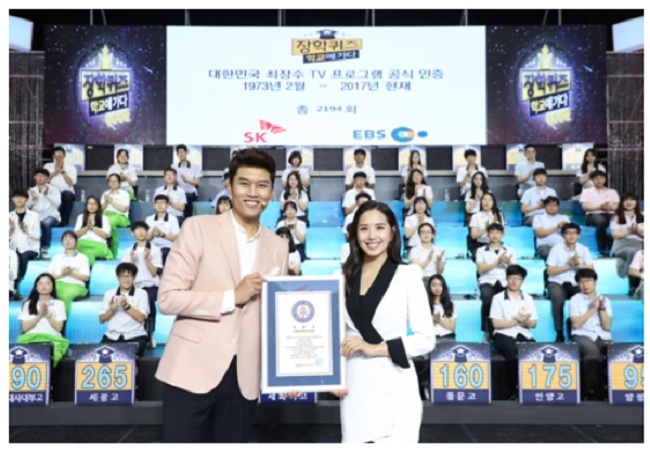 When the show was first aired on MBC, it wasfilmedin astudio as a quiz competition,butwhen itjumped over to EBS, the format was changed to a different style in which the crewvisits high schools across the country. (Image: Kobiz Media)

SK saidin a statement on April 27 that the Korea Record Institute (KRI), a record-certifying organization, had certified Scholarship Quiz, which aired a total of 2,194 episodesfrom February 18, 1973 to this month, as the country’s longest-running TV show.

Late president Choi Jong-hyunof SK Holdings first sponsoredScholarship Quiz in the early 1970s with the motto of “Human Power for the Nation’s Future”, and the show hasfeaturedmore than 18,000 students, many of whomhave gone on to careers as academics, lawyersand business people.

When the show was first aired on MBC, it wasfilmedin astudio as a quiz competition,butwhen itjumped over to EBS, the format was changed to a different style in which the crewvisits high schools across the country. In addition, a new segment was established in whichwell-known alumni give advice to and connect withstudents at their alma mater.Besides Scholarship Quiz, SK has been supporting“SK Competition of Wise Students”, aChinese quiz competition show on CCTV, topromoteacademic excellence and stimulate student development.

The“Scholarship Quiz” producersexplained that keeping a TV show on the airfor 45 years was an unprecedentedrecordconsidering that the history of Korean TV broadcast is not even70 years.“It was also the first case of a sole sponsorshipfor a TV program,” they added.

“Scholarship Quiz is not just a TV show, but has a symbolic meaning that reflects Korean modern history.We will continue to develop the showto promote academic achievement,” said one of the show’s producers.