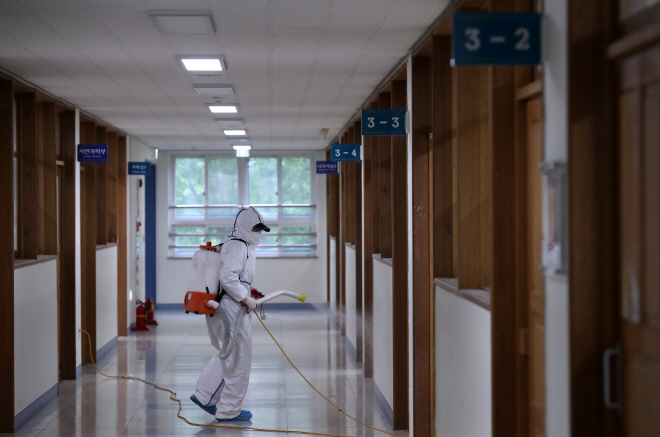 SEOUL, May 14 (Korea Bizwire) — Despite a recent spike in novel coronavirus infections involving teachers and students, the education ministry said Thursday it will forge ahead with its plan to reopen schools.

The opening has already been delayed several times, and Vice Education Minister Park Baeg-beom said in a briefing that the ministry “was not considering another delay in opening classes for high school seniors” who will take the university entrance exam this winter. Classes are scheduled to resume on May 20.

For other graders, “We need to see, but a delay is not being considered at this stage,” he said.

According to the Korea Center for Disease Control and Prevention (KCDC), there are 133 coronavirus patients in connection with a recent outbreak that started in nightclubs of the city’s multicultural district of Itaewon.

Among the confirmed cases, more than 10 are young students believed to have contracted COVID-19 from their teachers who visited some of the clubs.

According to the Seoul Metropolitan Office of Education, some 158 teachers and school officials are confirmed to have visited entertainment establishments in the city’s popular nightlife districts, including Itaewon, from April 29 to May 6.

Another tally released by the ministry showed 41 school officials, including 34 native English teachers, visited nightclubs in Itaewon from April 24 to May 6.

Forty people tested negative and one was waiting for a result as of late Thursday afternoon. During the same period, 880 school officials went to Itaewon, but didn’t visit nightclubs.

On Thursday morning, a teenage student and his mother in Incheon were confirmed to have contracted the virus, after the student’s teacher at a private institute spent time in Itaewon clubs and later tested positive.

The teenager’s school friend also tested positive, bringing the total cases traced to the Incheon instructor to 14, with most of them students and their contacts.

Authorities also found that some underage students sneaked into such clubs during the period against the law.

The recent surge in infections increases pressure on the education ministry, which has postponed reopening schools five times already.

“The ministry may announce a plan on reopening as early as this weekend or early next week at the latest,” a ministry official told Yonhap News Agency.

Amid growing pressure to create a safe learning environment, the relevant government agencies held an emergency meeting Thursday morning to strengthen quarantine and health safety measures in schools and private education institutions, as well as other facilities widely used by underage students. 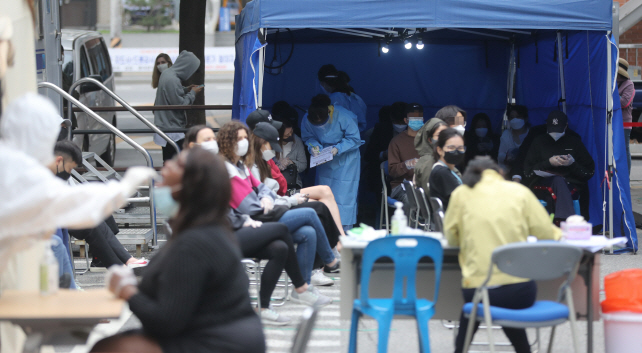 People wait to take COVID-19 tests at a makeshift clinic in Seoul, on May 12, 2020, amid the spread of the virus in the multicultural neighborhood of Itaewon. (Yonhap)

No less importantly, the authorities decided to tighten social distancing rules again, which were eased earlier this month, in school districts. Educational institutes that fail to comply with the rules can face a forceful closure.

The ministry is also toying with various ideas to safely reopen schools in a limited form, such as one-day-on, one-day-off schedules and running separate classes.

The government had planned phased reopening nationwide starting Wednesday, in line with its relaxed social distancing measures that went into effect on May 6.

But it delayed the plan earlier this week following the unexpected outbreak in Itaewon.

The ministry expects classes for high school seniors taking the university entrance exam this winter to open on May 20 as scheduled.

The ministry has put in place strict hygiene and social distancing rules, as well as detailed guidelines for monitoring possible patients to tackle the spread of the virus.

However, some parents remain concerned about the highly contagious virus.

A parent, who asked not to be named, said, “The possibility of an outbreak of even one patient at school doesn’t sit well,” referring to the isolation guidelines in the ministry’s response manual.

“I heard teenagers are more likely to be asymptomatic and to unwittingly spread the virus. I don’t think school quarantine measures are stringent enough,” the 49-year-old said.

An education expert, who also asked to remain anonymous, told Yonhap News Agency, “The ministry shouldn’t patch up the problem by delaying reopening schools on an as-needed basis.”

“The central government should set clear guidelines on this and put forward a short- and long-term plan.”