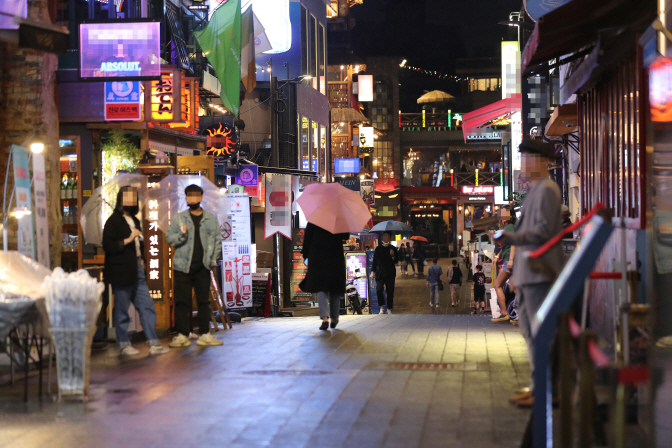 SEOUL, May 9 (Korea Bizwire) — The Seoul city government on Saturday effectively suspended business at clubs and bars in the city after recent infections in the city’s popular multicultural neighborhood of Itaewon put health authorities on alert over a possibly bigger outbreak.

Under an administrative order that has gone into effect immediately, all clubs, bars, “room salons” and other nightlife establishments across the capital will be banned from hosting crowds of people, virtually suspending businesses at such venues.

“Such facilities have to suspend business immediately and will face strict punishment if they breach (the order),” Mayor Park Won-soon said in a press briefing, adding the order will remain in effect under further notice.

“Carelessness can lead to an explosion in infections — we clearly realized this through the group infections seen in the Itaewon club case,” Park said, urging businesses and the public to closely abide by quarantine measures.

The precautionary measure comes after dozens of infections were reported in relation to a 29-year-old who tested positive after spending time at five clubs and bars in Itaewon last weekend.

South Korea reported 18 new cases Saturday, with 17 of those linked to the clubber.

But health authorities forecast the number to further rise considering that at least 1,500 people signed in entry logs at the affected facilities.

According to Yongsan Ward Office, which has jurisdiction over the multicultural district, a total of 7,200 people are estimated to have visited the five clubs and bars from April 30-May 5.

Officials have urged people who visited the Itaewon clubs and bars, including King Club, Trunk Club and Club Queen, between April 29 and Wednesday to receive screening tests and refrain from going outside to prevent additional transmissions.

Park, meanwhile, pointed out that the entry logs were mostly inaccurate. City officials have failed to get into touch with more than 1,300 people on the documents, he said.

The mayor asked visitors in the cited period to voluntarily go through screening, adding that the city will otherwise consult with police for additional measures.

The Korea Centers for Disease Control and Prevention said it has confirmed 27 cases traced to the Itaewon clubber, including the patient’s colleagues, as well as families and acquaintances of other patients.

The figure, tallied at 9 a.m., showed 13 were affected in Seoul, followed by 12 in the surrounding Gyeonggi Province and Incheon, one in North Chungcheong Province and another in the southern port city of Busan.

Park, however, said 40 cases have been confirmed nationally as of noon, including 27 in Seoul, 12 in Gyeonggi Province and Incheon, and one in Busan, 453 kilometers southeast of the capital.

The recent infections are believed to have mostly broken out when the country was still under a social distancing scheme.