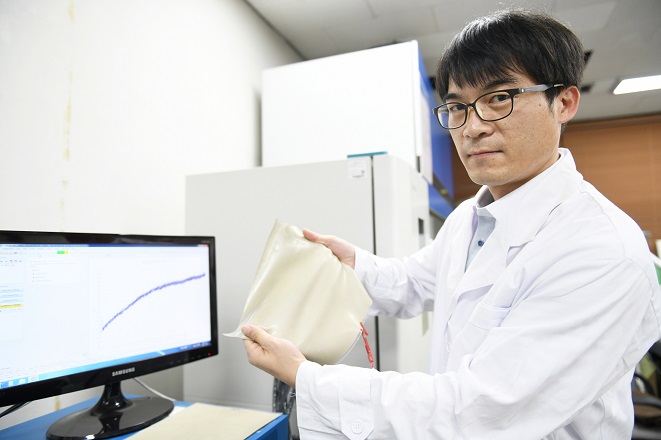 This photo provided by the Korea Electrotechnology Research Institute shows the institute’s researcher working at its newly-developed device.

CHANGWON, Oct. 8 (Korea Bizwire) — The Korea Electrotechnology Research Institute (KERI) has developed a new technology that enables wearable electronic devices to produce and supply electricity for themselves by acting as their own power sources.

The state-run institute announced on Thursday the development of an integrated technology comprised of a self-charging nano generator that produces electricity using frictional force generated by things like clothes, and micro super-capacitor power supply that stores and supplies the electricity to wearable electronic devices.

Based on its history of nano fusion technology development, the KERI adopted the method of integrating single-wall carbon nanotubes, which have excellent electrical conductivity, with elastic polymers.

The newly-developed device is elastic in all directions, while having strong enough durability to endure more than 10,000 uses in KERI’s in-house performance tests.

Using this device, military uniforms and shoes could produce electricity for themselves using their own frictional forces.

Another possible application would be for hiking or climbing apparel, with the self-charging power supply device used as a power source to charge flashlights and smartphones in emergency situations.