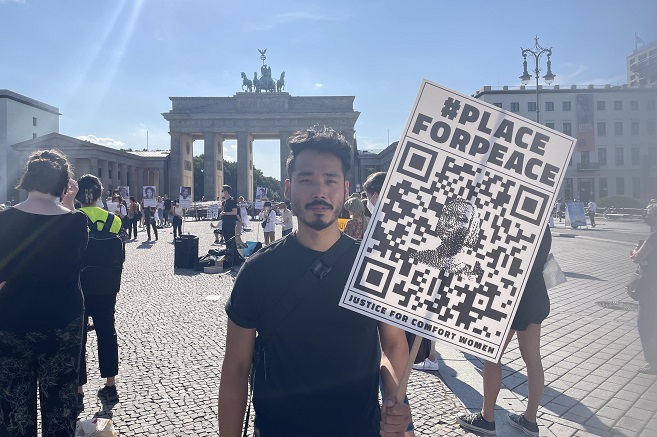 SEOUL, Aug. 17 (Korea Bizwire) — A second-generation Korean-German designer has embarked on a joint project with friends to develop a virtual statue of peace by using spare time after work or during weekends, as Japan continues to push for the removal of the Statue of Peace in Berlin, which symbolizes Korean victims of Japan’s wartime sexual slavery.

“I’ve been thinking about what I can do to promote the freedom of art amid such an unfair situation,” said Kang Ho-jin, a designer in Mitte, Berlin where the Statue of Peace is located.

“So I got in touch with four people from the Korea Verband to work on the virtual statue of peace.”

Kang has currently developed a second version of the virtual statue, which will continue to be upgraded.

The virtual statue is accessible by a QR code or a link and can be ‘set up’ anywhere around the world with a smartphone camera.

Kang also plans to collect all social photos of the virtual statue to create a new art piece and utilize the #PLACEFORPEACE hashtag.

“It’s only childish for the Japanese government not to admit the atrocities committed against the sex slaves,” he said.

“In Germany, schools teach us every year about the atrocities committed by the Nazis, and about the victims,” he added. “I believe that’s the way for the government and culture to grow.”