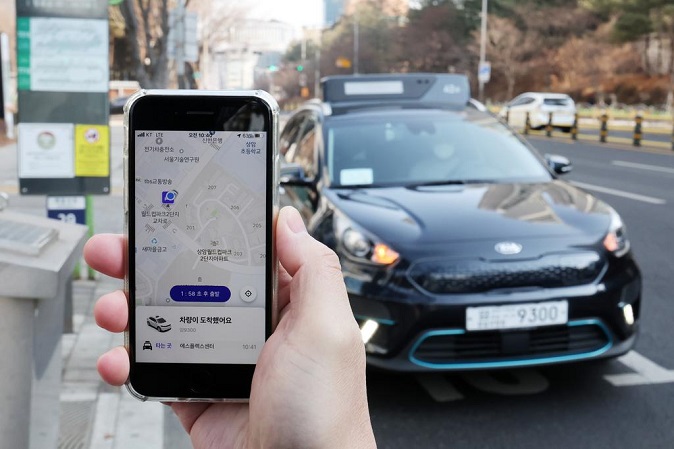 A passenger calls a self-driving taxi via an exclusive app, TAP!, in the Sangam district, a test zone for autonomous cars, in Seoul on Feb. 10, 2022. (Yonhap)

The Ministry of Land, Infrastructure and Transport said Wednesday it had posted the instructions on registering for a self-driving taxi business along with detailed requirements on acquiring relevant approval on its website.

Commercial taxi services using autonomous vehicles will be made available to the public in 14 test zones spread across 10 cities and provinces.

The registration requirements have been designed for both Level 3 and 4 self-driving technologies, allowing autonomous taxi businesses to provide commercial services without the need to have a test driver onboard once authorization has been acquired.

The ministry also included requirements for a 30-day preliminary trial in the test zones before submitting passenger safety plans and registration documents, to give authorization after a proper assessment of the vehicle’s autonomous driving performance.

The ministry plans for a transition into the “negative” system, in which all actions are allowed unless stipulated otherwise, to allow autonomous driving cab services nationwide.