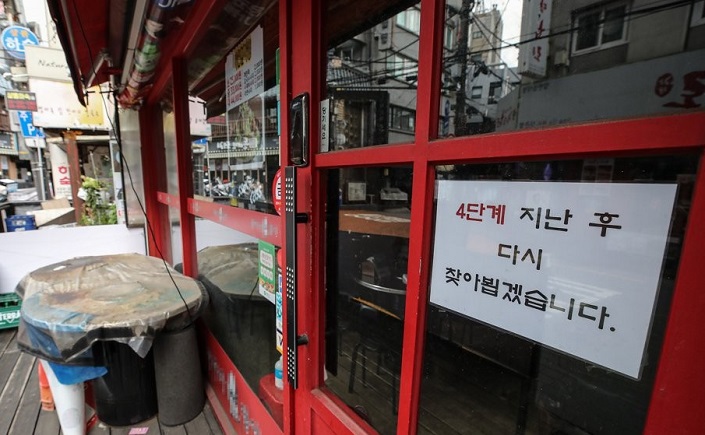 A restaurant in the Shinchon district in western Seoul is closed on Aug. 20, 2021. A notice put on the window says the store will reopen after the end of the ongoing Level 4 social distancing restrictions. (Yonhap)

SEOUL, Jan. 6 (Korea Bizwire) — The self-employed who shut down operations due to the government’s coronavirus pandemic-related restrictions will be allowed to terminate their commercial lease contracts earlier than the end date.

The Ministry of Land, Infrastructure and Transport announced that the revision of the Commercial Building Lease Protection Act took immediate effect after being promulgated on Tuesday.

Under the revision, the self-employed who shut down operations due to the government’s restrictions or ban on gatherings for more than three months to fight against the pandemic will be entitled to terminate their commercial lease contracts.

The termination of the contracts will take effect three months after the landlords are notified about the termination.

This will help alleviate the burden on the self-employed, who have struggled to pay rent even after they shut down operations due to a lack of customers.

According to a survey conducted by the emergency committee of the self-employed and the People’s Solidarity for Participatory Democracy of 791 self-employed individuals, 50.7 percent of the respondents said that they had overdue rent payments.