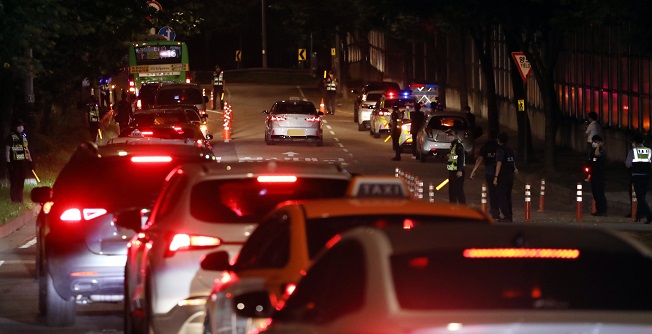 An association of self-employed businesses, which organized the protest rallies, said at least 5,000 members participated in the drive-through events held in Seoul and nine other regions, including Busan, Gwangju and Daejeon, from 11 p.m. Wednesday until 3:30 a.m. Thursday to call for eased COVID-19 restrictions and more compensation.

It was the third time for the association to stage such car protests to demand the government relax COVID-19 restrictions and provide more compensation for financial losses stemming from the social distancing scheme that restricts operations of cafes, restaurants, gyms and karaoke rooms, among others.

Similar drive-through protests occurred in Seoul in July and in Busan and surrounding South Gyeongsang Province in August.

In Seoul, about 3,000 to 4,000 vehicles driven by association members gathered on the western section of Riverside North Road, near the Yanghwa Grand Bridge, beginning at 11 p.m.

Participants turned on their hazard lights and slowly moved, at a speed of 20 to 30 kph, toward the Hannam Grand Bridge on the central section of the road, in a show of protest.

While passing by the bridge, they honked their horns in line with a certain beat, saying it was an SOS signal. The drive-through rally caused traffic congestion on the road.

“Self-employed workers incurred debts of over 66 trillion won (US$56.4 billion) over the past 1 1/2 years, and as many as 453,000 shops went out of business,” an association official said.

“The COVID-19 fatality rate has fallen from the 3 percent range to the 0.1 percent level. But only self-employed people have been forced to bear the damage caused by (authorities’) failure to transform the quarantine system. We can’t stand the reality anymore,” the official said.

The participants complied with social distancing rules during the rallies, staying in their cars and leaving windows closed. 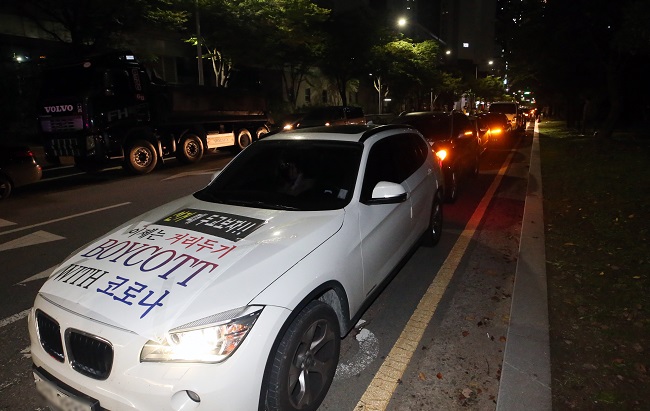 Seoul is currently under Level 4 social distancing rules, in which the assembly of more than one person is banned. Drive-through rallies are illegal if attended by over one participant, according to the police.

Seoul police said they regarded the drive-through rallies as violating the Infectious Disease Control and Prevention Act and the Assembly and Demonstration Act and photographed the participating vehicles for possible punishments in the future.

Under new guidelines, up to six people are allowed to gather in the capital area if they include at least two vaccinated people during the daytime and four after 6 p.m.

Restaurants and cafes, for instance, have to close by 10 p.m. and are allowed to serve only takeout and delivery from 10 p.m. to 5 a.m.

Seoul’s Mapo Police Station said Thursday it referred Kim Ki-hong, co-leader of the association, to the prosecution for punishment on violation of the Assembly and Demonstration Act during its drive-through rally in downtown Seoul in July.

Kim is accused of masterminding the late-night vehicle rally in Yeouido, Hyehwa and Sangam districts on July 14 and 15.

More than 1,000 vehicles took part in the rally, and Kim was booked by police last month for organizing it without notifying the relevant authorities beforehand.