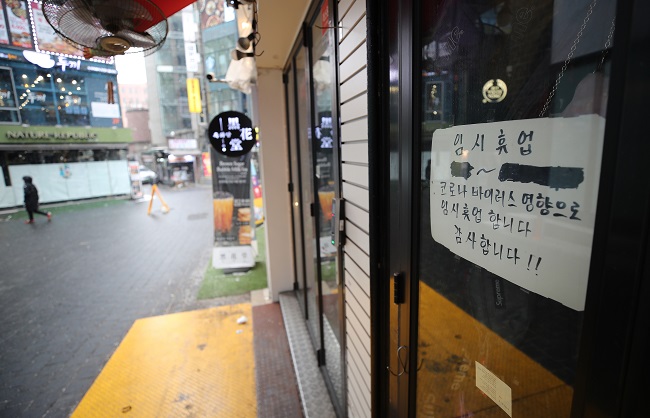 A store in the shopping district of Myeongdong in central Seoul remains close on Jan. 12, 2021, due to the COVID-19 pandemic. (Yonhap)

SEOUL, Jan. 19 (Korea Bizwire) — An increasing number of self-employed and wage workers are working at least two jobs as the COVID-19 pandemic drags on.

Statistics Korea reported that among new recruits in December, 407,000 people had experience working at a second job.

While the data shows that the majority were ‘work-alone business owners’ working two jobs, some of them might have been in fact forced to lay off staff due to the prolonged economic downturn.

The number of self-employed business owners without any staff are increasing.

Statistics Korea reported in December that the number of self-employed jumped by 75,000 over the last 12 months.

Last year, online job portal Incruit conducted a survey of 1,599 men and women with prior experience seeking a part-time job, more than half of whom responded that they either had second jobs already or had the intention to work two jobs.

Of note, 47.4 percent of the self-employed said they had a second jobs because of dwindling income caused by pandemic.