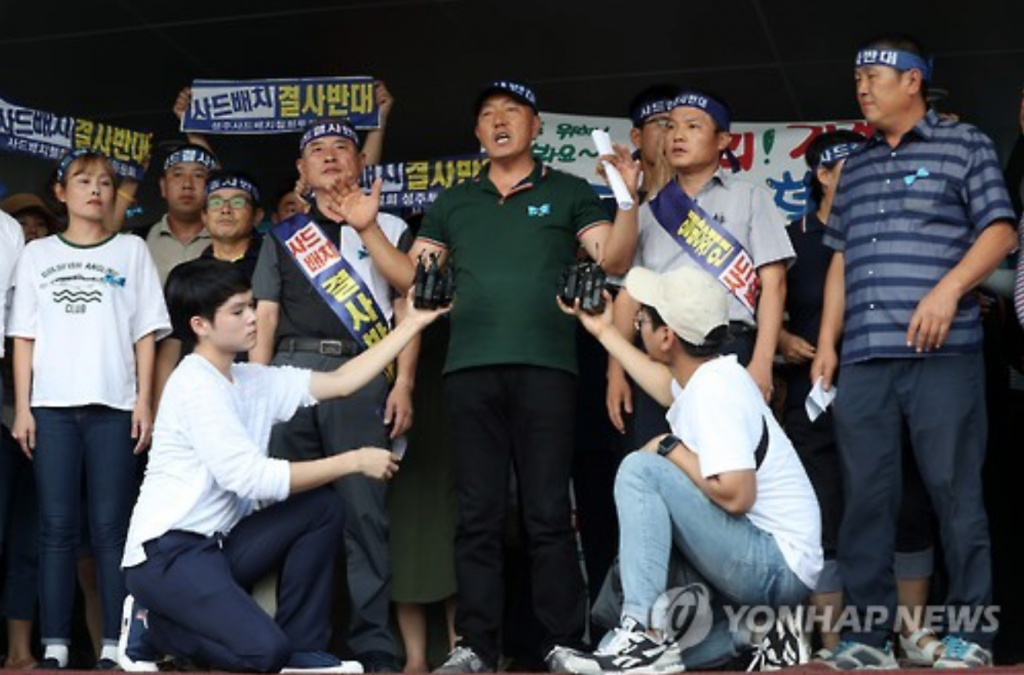 A leader of protesters opposing the deployment of a U.S. missile defense system in their neighborhood announces in Seongju, North Gyeongsang Province, on Aug. 21, 2016, that they will ask the government to pick another site for the system. (image: Yonhap)

SEONGJU, South Korea, Aug. 21 (Korea Bizwire) – Residents of Seongju on Sunday officially requested that the government pick an alternate site within their county for the deployment of the advanced U.S. missile defense system.

The emergency committee set up to respond to Seoul’s plan to deploy the Terminal High Altitude Area Defense (THAAD) battery in Seongsan-ri, said they can accept a different site that is not near population centers.

Committee members held a vote earlier in the day with overwhelming numbers saying they favor a different site for the THAAD battery. Of those on the committee 23 agreed to host THAAD at a different site, one opposed and nine abstained from voicing their views.

Originally after picking Seongju as the site for the missile defense system on July 13, Seoul said it wants to use land already occupied by a South Korean anti-aircraft missile base.

Policymakers said that the rural country 296 kilometers southeast of Seoul is ideal for THAAD because the system’s interceptors can defend key military and industrial infrastructure in South Korea from North Korea’s ever evolving nuclear and missile threat.

Despite such reasoning, the people of Seongju, fearful of health risks posed by the powerful AN/TPY-2 radar, opposed the deployment. They were, moreover, upset that there was not any prior consultation regarding the deployment with locals

The committee, however, didn’t offer its own recommendations on an alternate site, leaving the decision up to the defense ministry.

On Friday, the committee held a meeting where participants said a new site can be examined if the defense ministry scraps its original plan for Seongsan-ri which is relatively close to Seongju town. Two days earlier, defense minister Han Min-koo met with local representatives when he said the government was open to considering new sites for the THAAD battery if local residents reached a consensus on the anti-missile system deployment issue.

Seongju residents have floated the area near Mt. Yeomsok, Mt. Kkachi and Chojeon-myoen as possible alternative sites, although the two mountain locations have already been rejected by the defense ministry for being inappropriate.

The defense ministry, meanwhile, said that if a formal request is sent by Seongju, it will make its own views known.

Any decision is expected to be based on the location, cost of setting up the battery and whether it can be set up by the end-2017 as initially planned. Because nearby Gimcheon and Chilgok residents have expressed reservations about THAAD being placed near their counties the ministry may have to examine this aspect of the deployment as well.