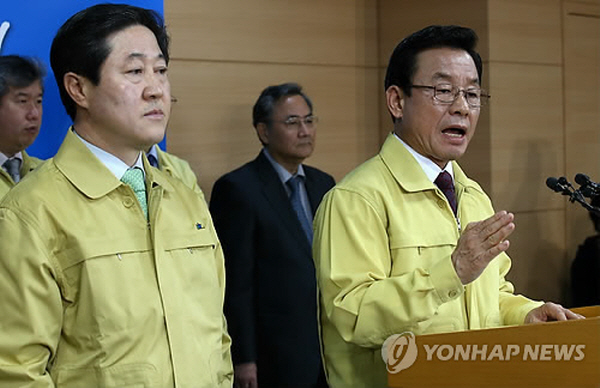 Public Safety Minister Lee In-yong(R) said priority will be given to preventing the loss of the bodies of the nine people still missing and minimizing any possible damage to the hull. (image: Yonhap)

The retrieval will likely begin in September and take up to one and half years, the Ministry of Public Safety and Security said after a meeting of the relevant government agencies.

After making a sharp turn, the 6,825-ton ferry Sewol capsized off Jindo Island on April 16 last year en route to the southern resort island of Jeju from Incheon, west of Seoul.

Most of the victims were teenage students on a field trip, with nine bodies still missing.

In a news conference, Public Safety Minister Lee In-yong said priority will be given to preventing the loss of the bodies of the nine people still missing and minimizing any possible damage to the hull.

As the bodies of the missing people are believed to be inside the hull, the vessel will be lifted from the sea bottom without changing its current position, according to the ministry.

The main part of the recovery will involve divers who will link scores of chains around the hull to two cranes to pull the vessel out of the sea, the ministry noted.

Up to 150 billion won (US$139 million) will likely be required for the recovery, although the cost could increase further if the project is delayed or any unexpected technical issues arise.

Still, the retrieval also has safety risks and uncertainties, including the possible destruction of the 20-year-old vessel, typhoons in the summer, and a strong current in the shipwreck’s location, Park said.

“The government will spend its utmost efforts to salvage the ferry Sewol successfully through the related bodies’ full preparations for the work,” Park said.

Oceans Minister Yoo Ki-june said his ministry will lead the salvage project, adding it will start the process soon by selecting salvage firms from home and abroad before coming up with a comprehensive salvage scheme.

“The retrieval will be carried out with our full efforts and in a way that does not create collateral safety accidents,” Yoo said, pledging the government’s endeavor to help the victims and their bereaved families.

The bereaved families welcomed the decision on the salvage of the ship.

They had long called for a speedy retrieval of the hull in hopes to find the bodies of those who are still missing.

“We welcomes the official announcement of the recovery plans,” Yoo Kyung-keun, the spokesman for the families’ group, said. “We also call on the government to carry it out transparently in close communications with the families.”