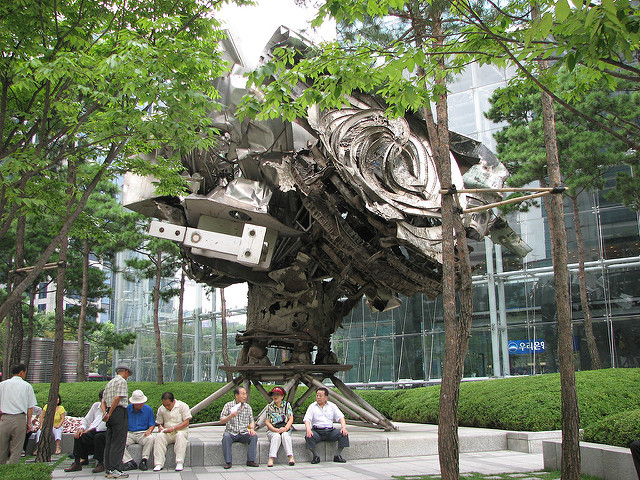 The 30-ton steel artwork was met with both controversy and resistance from citizens and the Korean art community for its questionable artistry. (image: Flickr/ Ian Muttoo)

SEOUL, Aug. 29 (Korea Bizwire) – POSCO is among world’s leading steel-makers. And its sculpture in front of the POSCO center in Gangnam (ugly though some say it is) represents just that—steel. But Posco’s sculpture has received a more recent spotlight on the multi-national art market website, Artnet.com, labelling it as one of “The 10 Most Hated Public Sculptures”.

Titled “Amabel,” and designed by Frank Stella, an American painter and sculptor known for abstract expressionism, it was installed in 1997 after Stella was commissioned by POSCO. Korean regulations require the spending of 1 percent of construction costs on public art when constructing a new large scale building. $1.8 million was invested for Amabel.

The 30-ton artwork was met with both controversy and resistance from citizens and the Korean art community for its questionable artistic merit, and had been considered for relocation shortly after it was revealed to public. Artnet also called it the “Frank Stella sculpture that shocked art lovers in Seoul”.

Yet, Amabel is more than just scrunched up metal plates. It was made from hundreds of pieces of scrap iron taken from plane wreckage, and from a distance, the sculpture reminds one of flower petals. In fact, Stella initially thought of calling it a ‘Flowering Structure’, but the name was ultimately changed to honor the death of his friend’s daughter, Amabel.

According to Stella, he wanted to convey a message that the recovery of fragmented humanity can help resolve social issues in modern society.

Other public sculptures that made Artnet’s list included statues of Nefertiti in Samalut, Egypt, of Pope John Paul II in Rome, and of Margaret Thatcher in London. For the full list by Artnet, click here.