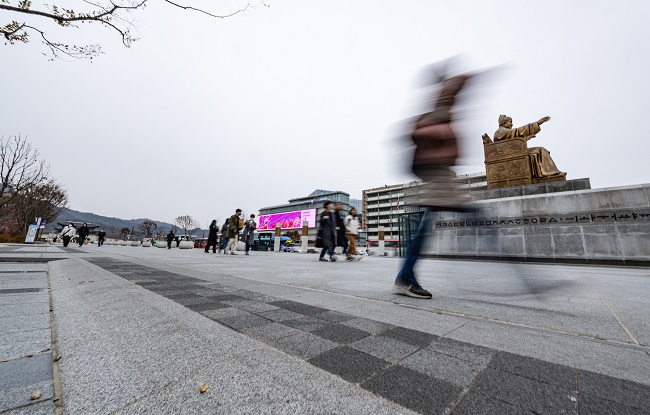 People walk through Gwanghwamun Square in Seoul on Nov. 22, 2022. (Yonhap)

SEOUL, Nov. 22 (Korea Bizwire) — The Seoul metropolitan city on Tuesday conditionally approved cheering gatherings at a public square in the capital during the FIFA World Cup.

The city gave the green light for the supporters’ group for the South Korean national team, called the Red Devils, to use Gwanghwamun Square for cheering events from Wednesday through Dec. 3.

Conditions include ensuring the safety of participants during nighttime events, smoothly managing movement routes and rapid emergency response and complying with outcomes of consultations from a relevant advisory group.

The approval came amid growing calls to ensure public safety in the wake of a crowd crush during Halloween celebrations in late October that left at least 158 people dead.

The Red Devils submitted an application for use of the square on Thursday. But they resubmitted the application on Monday after the authorities called for an improvement in safety measures.

Under the revised application, the group plans to increase the number of its safety personnel to 340 from the previously set number of around 150 and install additional large screens across the square to spread the crowd over a broader space.

The Red Devils estimates some 8,000 people will gather at the square on Thursday and next Monday, followed by 10,000 on Dec. 2.

Meanwhile, the National Police Agency (NPA) plans to deploy riot police to the Seoul square during the cheering events to maintain order and ensure public safety, according to an NPA official.