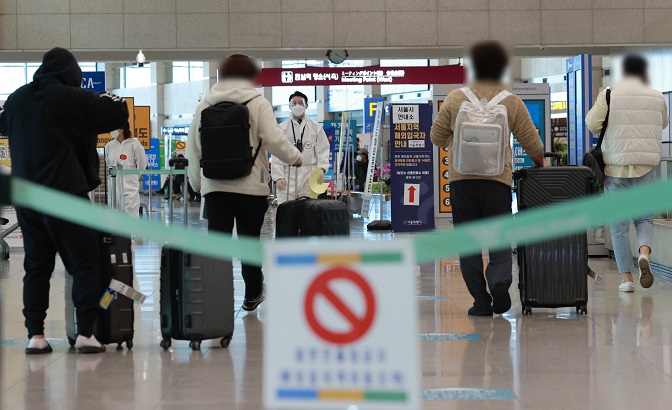 SEOUL, April 20 (Korea Bizwire) — South Korea’s daily new coronavirus cases remained in the 500s for the second day Tuesday as health authorities vow to accelerate the country’s nationwide vaccination campaign targeting the vaccination of 3 million by the end of this month.

The country is also seeking to sign a “swap” deal with the United States to secure enough vaccines amid woes over supply shortage.

The daily tally was slightly up from 532 cases Monday. The comparable figures were 671 on Sunday and 658 on Saturday.

The daily figure stayed above 600 last week due to growing virus clusters as the warmer weather has led more people to engage in social activities.

The country added one more death, raising the death toll to 1,802.

As of 9 p.m. Tuesday, health authorities and local governments reported 677 new virus cases, up 200 from the same time the previous day. The figure will be counted in the daily tally to be announced Wednesday.

The recent uptick in new cases led health authorities to maintain the current level of social distancing rules through May 2, while adding restrictions to entertainment establishments, such as night clubs and bars.

Despite fears of another wave, health authorities said the country’s medical system is able to cope with the current situation.

“Compared with the previous week, (the number of new cases) is gradually increasing,” Yoon Tae-ho, a senior health official, said in a briefing.

“We will have to provide different measures if the situation worsens this week. However, (as of now) we believe the current response system can handle the situation.”

Health authorities have also pushed for more vaccinations, aiming to inoculate 3 million people by the end of this month and 12 million by the end of June.

The KDCA said 60,586 people have been fully vaccinated, with two doses.

A total of 12,395 cases of side effects after vaccinations have been reported, up 166 from a day earlier, but 98.4 percent were mild symptoms, including muscle pain and fever.

A total of 49 deaths after vaccinations have been confirmed, according to the KDCA, up three from the previous day, although authorities have so far ruled out links between the deaths and the vaccinations. 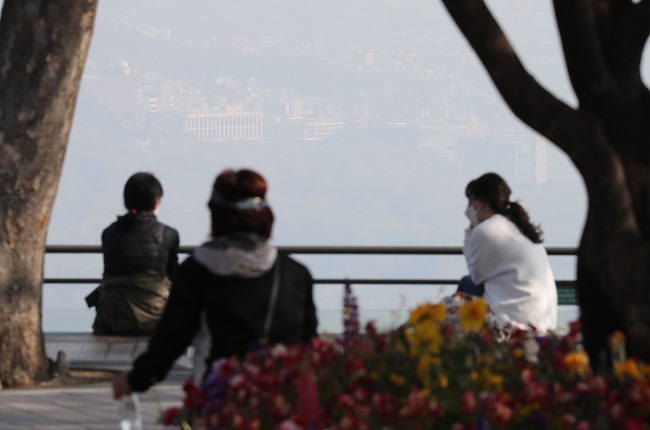 Masked people are seen at Namsan Park in central Seoul on April 20, 2021. (Yonhap)

South Korea has said that it has secured vaccines for 79 million people and targets to achieve herd immunity by November.

In order to meet the target, the government plans to inoculate 36 million people with their first vaccine jabs by September.

Health authorities said they are in talks with multiple pharmaceutical companies to secure more vaccines.

The country has so far inked deals to secure vaccines from AstraZeneca, Pfizer, Moderna, Johnson & Johnson’s Janssen and Novavax.

On Tuesday, Finance Minister Hong Nam-ki, who is the acting prime minister, said in a parliamentary session that Moderna’s vaccines will arrive in South Korea in the second half of the year.

The government said it will establish 264 injection centers across the country by the end of this month.

Foreign Minister Chung Eui-yong told lawmakers that the country is discussing a swap deal with the United States for more COVID-19 vaccines, although he did not elaborate on details.

Health authorities acknowledged that such talks are under way but added that meaningful progress has not yet been made.

Beginning Monday, the country started administering AstraZeneca vaccines to health care workers for the disabled, seniors and veterans, as well as airline crew members aged 30 and above.

Pharmacists, therapists and dialysis patients, as well as around 173,000 social service workers, including police officers and firefighters, will be eligible for the AstraZeneca vaccine beginning next week.

Of the newly confirmed locally transmitted cases, 349 cases came from the capital area, with 147 from Seoul, 184 from Gyeonggi Province and 18 from Incheon, just west of the capital.

There were 20 additional imported cases, putting the total figure at 8,022.

The country has so far identified a total of 321 cases of “emerging” variants of the novel coronavirus since December, in addition to around 450 cases of the major three variants from Britain, South Africa and Brazil that are known to be more transmissible.

It is unclear whether the new strains are more deadly than current circulating variants of the virus.

South Korea has strengthened efforts to curb the spread of virus variants here, extending the ban on passenger flights arriving from Britain, which has been in place since Dec. 23, until Thursday.

All foreign arrivals have also been required to present certificates of negative polymerase chain reaction (PCR) tests taken within 72 hours of their departure for South Korea since late February, as well as to undergo a 14-day isolation period.