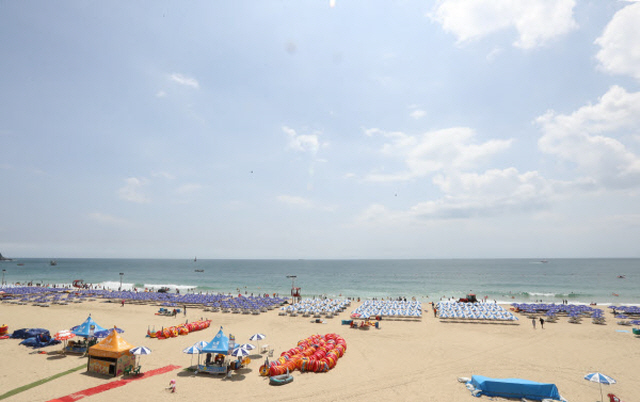 Visitor numbers at beaches in Busan, South Korea’s second largest city and home to the two most popular beaches in Korea, plunged by a startling 7 million compared to last year. This accounts to a 14.6 percent drop.

Gwangalli Beach lost the most tourists at 2.55 million, followed by Haeundae at 2.37 million, Songdo at 1.83 million and Dadaepo at 0.4 million.

Beaches in North Gyeongsang Province were no different. The 24 beaches in the area altogether attracted 4.9 percent fewer tourists than last year.

Gyeongju beaches suffered the most, as they welcomed only half the number of visitors this year compared to 2017. Other beaches in the province – Youngdeok, Uljin, Wolpo and others – faced the same reality.

“We had a lot of vacancies this summer,” said a hotel owner at Wolpo. “This never happened before. I think sales went down by about 30 percent.”

The only exception was Youngildae Beach in Pohang, which attracted 400,000 more visitors, likely due to the popularity of the Pohang International Fireworks Festival.

This summer South Korea was plagued by a heat wave that rewrote the record book for high temperatures, records that have existed since 1907.

The temperature soared to 40.7 degrees Celsius in Hongcheon on Aug. 1, replacing the 76-year-old national record of 40.0 degrees set on Aug. 1, 1942 in Daegu. Seoul also set a new record by recording a daytime high of 39.6 degrees the same day.

The sweltering heat pushed tourists to switch their travel destination from beaches to hotels, shopping malls or indoor water pools – where air-conditioning is available in abundance.

Those who did head to the beach, on the other hand, chose to go at night.

“While the scorching heat cleared the beaches during the daytime, more tourists found them at night,” said a Busan official. “Haeundae Beach was more crowded at night, as well as the plaza, the market and the stores in its vicinity.”