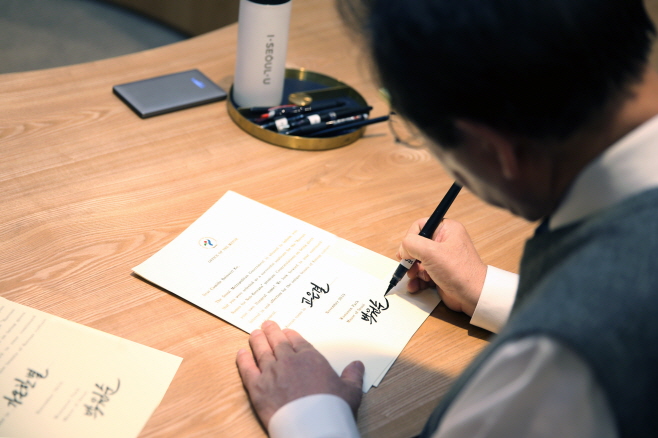 Seoul Mayor Park Won-soon signing a letter to Camille Boisvert Ko, who applied for a Korean name as part of the city’s program to give foreigners Korean names. (image: Seoul Metropolitan Government)

SEOUL, Nov. 28 (Korea Bizwire) — Having a localized name or nickname can be fun for some.

The Seoul Metropolitan Government said Thursday it recently gave honorary Korean names to 11 people from 10 countries who applied for them.

The city bestowed the Korean names to commemorate Hangeul Day on Oct. 9.

A 29-year-old Texan, Camille Boisvert Ko, who’s married to a Korean-American and is taking Korean language classes, was one of them.

She got the native Korean given name “Eun-kyul,” which has the meaning “Live as a person with a character of beautiful textures,” to add to her hanja surname, according to the city government.

Australian couple Colin and Helene Dowdle, who adopted two sons from the country, wanted Korean names “for their family’s unity.”

They got the names “Hoyeon Bit” and “Hoyeon Sol” from the term “hoyeonjigi,” meaning great spirit, and “bit” and “sol,” meaning light and pine tree, respectively.

Deborah Lynas of Britain, a 49-year-old who is, like her 18-year-old daughter, a BTS fan, got the name “Chaeul Bora.” “Bora” resembles her first name.

City officials said that around 800 people from 92 countries applied for Korean names, most of whom are interested in Korean culture or have links to Korea.

The city said another round of applications is open until Dec. 7. Those selected will be given Korean names on Christmas Eve. Applications can be sent to english@seoul.go.kr.