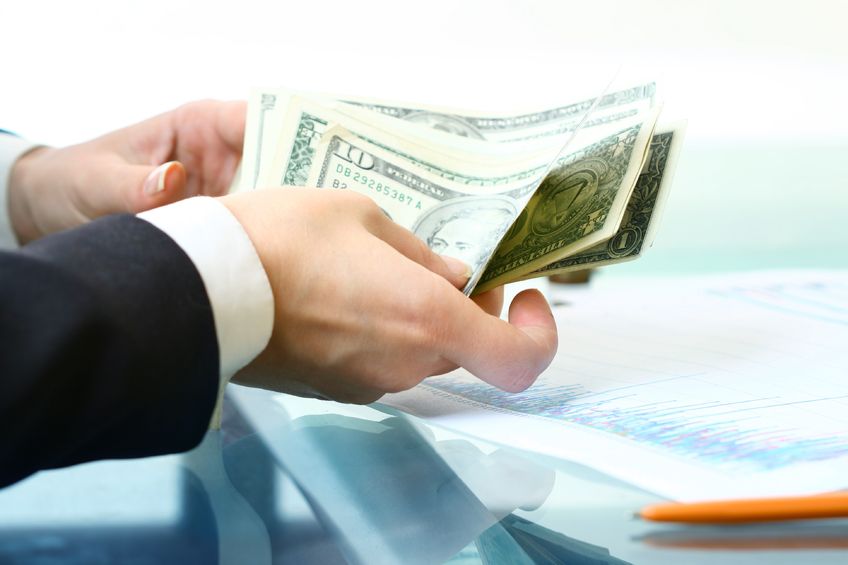 As of the end of 2013, the number of foreign residents with addresses within Seoul proper is 395,640, accounting for 3.9 percent of total Seoul residents.(image: Kobizmedia/Korea Bizwire)

SEOUL, July 3 (Korea Bizwire) – From now on, all foreign residents living in Seoul can send money to their home country without fees. Starting on July 1, Woori Bank will exempt 100 percent of remittance charge (from 10,000 won to 30,000 won) to foreigners residing in Seoul when they visit any of its bank offices nationwide.

In addition, the bank will take a discount of up to 80 percent when the foreign residents exchange foreign currency in its offices (50% for currencies other than U.S. dollar, Japanese yen, and euro), with the telex charge reduced to 3,000 won from 8,000 won.

※ Growing Importance of Remittance Business for the Banking Industry

A remittance is a transfer of money by a foreign worker to an individual in his or her home country. Money sent home by migrants competes with international aid as some of the largest financial inflows to developing countries. In 2012, according to the World Bank Report, $401 billion went to developing countries (a new record) with overall global remittances at $514 billion. The economic impact remains contested among researchers, however, remittance transfers do draw people towards the financial services that are available to them. (Wikipedia) 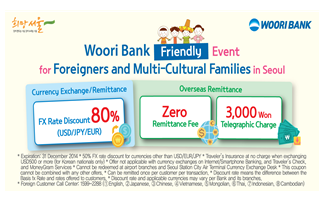 From now on, all foreign residents living in Seoul can send money to their home country without fees.(Woori Bank)

Overseas remittance is an important factor for maintaining a good family relationship for foreign women living in Korea. As much as a half of foreign women living with a Korean husband in Korea are sending money home, with the percentage of those who send in excess of 1 million won a year reaching 72.7 percent.

As of the end of 2013, the number of foreign residents with addresses within Seoul proper is 395,640, accounting for 3.9 percent of total Seoul residents. The largest portion of the foreigners is consisted of migrant workers (29%), followed by Koreans with foreign nationalities (20%), foreigners with marriage visas (12%), and students (7%).

The Seoul Metropolitan City Government and Woori Bank will keep looking for other ways to help foreign residents. Yoo Hee-cheon, the city government’s manager in charge of multicultural affairs, said, “Most migrant workers and foreign women living with Korean husbands are engaged in low-wage jobs but they send a large part of their income back home to support their families. Just like the latest measure to give exemption to remittance charges, we will look for ways to help them in practical ways.”

Information on the remittance limit of emigrants to overseas (Woori Bank)

Key Info: If the relocation expense exceed USD 100,000 or its equivalent per household, the total overseas relation expense should be reported to the competent tax office of the emigrant, and receive the certificate of fund sources.
Required documents :
- Passport, visa or permanent residency visa copy
- Application form for designating the foreign exchange transaction bank
- Certificate of overseas emigration report (the original issued by the Ministry of Foreign Affairs and Trade) or the certificate of relocation to the foreign country (issued by embassies and legations abroad
- Certificate of fund sources (if the relocation expenses exceed USD 100,000)