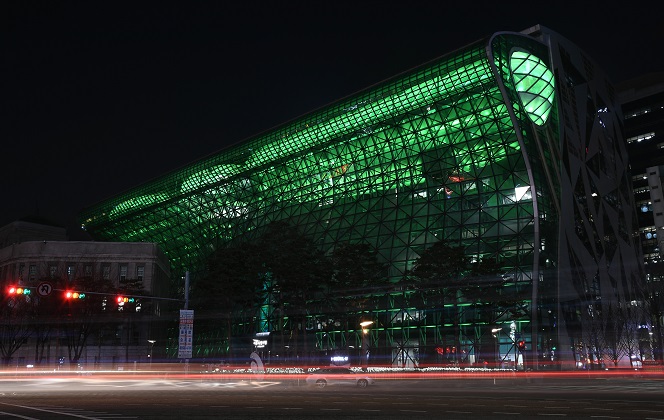 This photo, provided by the Seoul city government, shows its city hall building glowing in green.

SEOUL, Dec. 11 (Korea Bizwire) — The Seoul metropolitan government said Friday it will light up its city hall in green this weekend as part of a global event to mark the fifth anniversary of the Paris Agreement.

The main building of the Seoul City Hall complex will glow green for an hour from 6 p.m. Saturday, according to the city government.

A total of 96 cities around the world, including Paris, New York and Los Angeles, will bathe their landmark buildings in green that night, joining an event hosted by the C40 Cities Climate Leadership Group, a network of the world’s 40 megacities committed to achieving carbon neutrality by 2050. Seoul is part of the group.

The event aims to celebrate the fifth anniversary of the Paris Agreement adopted by 195 countries in 2015 at the 21st Conference of Parties of the United Nations Framework Convention on Climate Change to combat climate change.

Parties to the treaty pledged to limit the average increase of global temperature to below 2 degrees C, preferably to 1.5 C, compared to pre-industrial levels, by 2100.

“Seoul city has declared it will work to go carbon neutral by 2050 as part of efforts to help the Paris Agreement reach its goal,” said Lee Dong-ryul, a senior official overseeing the city’s environmental policy.

“(The city government) will light the city hall building in green to show that it will work together (with other countries) to prevent the acceleration of climate change,” he added.