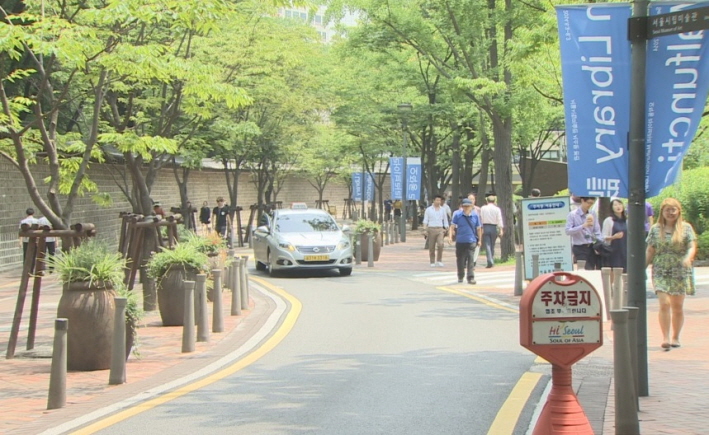 The pedestrian environment will also be improved by paving roads using special anti-heat materials for pedestrians in the summer. (Yonhap)

SEOUL, May 31 (Korea Bizwire) — The Seoul Metropolitan Government (SMG) plans to invest in creating a ‘walking-friendly’ environment as it embarks on a project this year to become South Korea’s ‘pedestrian capital’.

The city vowed to invest 642 billion won (US$538 million) over the next five years to expand the transport mode share of walking up to 20 percent, and reduce pedestrian deaths per 100,000 people down to 0.84 persons.

The city will introduce an integrated walking public transport system that finds the best routes to reach the destination by walking, using public bicycles, shared cars, buses, and subway.

This system will also provide the location of nearby convenience stores, the number of taxis near each bus stop, and information on traffic support for vulnerable groups.

The pedestrian environment will also be improved by paving roads using special anti-heat materials for pedestrians in the summer.

At bus stops and other pedestrian facilities, ‘cooling fog,’ or artificial sprinklers, will be installed to lower nearby temperatures by 2 to 3 degrees.

Landmark buildings throughout Seoul will open up their first floors to be used as walking paths, which will help connect severed paths and create shortcuts.

“We plan to carry out the project to complete the city’s aim to become the city of pedestrians.”