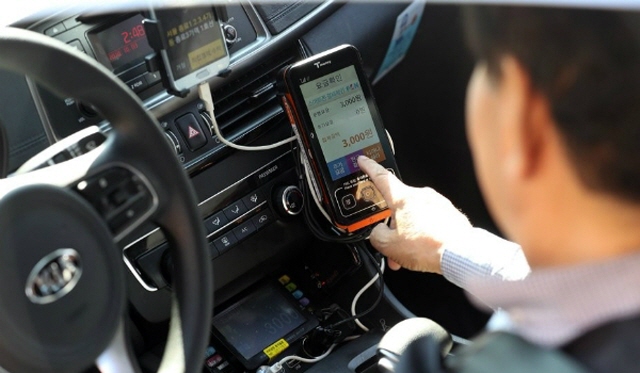 Unlike the existing machine methods that measure distance with wheel rotations, the new taxi meter application uses a smartphone’s GPS to calculate distance and the amount owed. (Yonhap)

SEOUL, Mar. 28 (Korea Bizwire) — The city of Seoul announced on Wednesday that it had selected “Seoul Hybrid Taxi App Meter”, which was developed by Korea Smart Card Co., a taxi card payment terminal operator, to submit to the Ministry of Science and ICT’s ‘regulatory sandbox’.

A regulatory sandbox is a system that exempts and suspends regulations for a certain period of time for new technologies or products.

Unlike the existing machine methods that measure distance with wheel rotations, the new taxi meter application uses a smartphone’s global positioning system (GPS) to calculate distance and the amount owed.

The app’s functionality is similar to the functions provided by smartphone navigation apps from Uber.

The city explained that there were shortcomings in GPS reception, such as in tunnels and underground roads, but error was reduced to 0.25 percent by considering the number of wheel turns.

Since the new taxi meter app will also be remotely adjusted for fares, there is no need to take each meter apart and update it for a few weeks as is now the norm, and a fare conversion chart can be shared with passengers immediately.

The city will further build in a foundation where it can provide various services that could calculate automatic over-the-clock rate surcharges and differential hourly rates.

If the taxi meter application passes the ministry’s committee to review new technologies and services, and obtains temporary approval for two years, the city plans to apply it to 7,000 taxis, which is 10 percent of the 72,000 taxis in Seoul, starting in June.