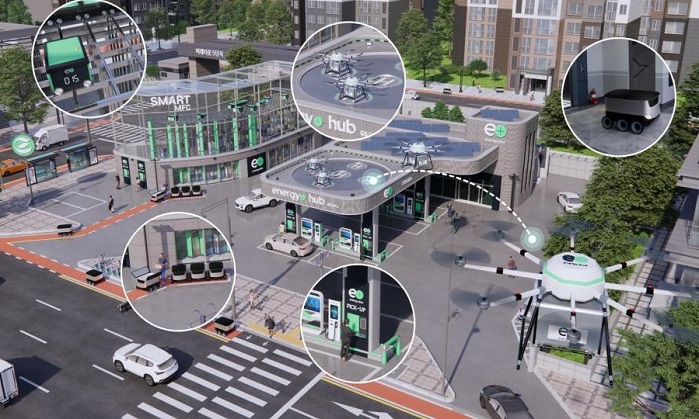 This rendering released by the Seoul Metropolitan Government shows the logistics hub at a gas station in Southern Seoul.

SEOUL, Nov. 29 (Korea Bizwire) — The Seoul Metropolitan Government said Monday it will start an experimental project to transform gas stations into logistics hubs of the future.

The growing popularity of online transactions and diversifying logistics channels have resulted in higher demand for distribution, but warehouses and logistics complexes in the capital city only account for 6 percent of those in Gyeonggi Province, requiring immediate attention to expand infrastructure.

In response, Seoul joined hands with GS Caltex Corp., a major South Korean refiner, to turn a gas station in Seocho District into an experimental platform for a future logistics hub.

With work starting in December, construction is expected to be completed by early next year.

A Smart Micro-fulfillment Center (MFC), an unmanned, automated storage facility, will cover an area of 120 square meters at the gas station.

The Smart MFC will be run by five or six robots, which will send out some 3,600 parcels every day. The parcels will be delivered by drones.

The city will set up a drone station on the rooftop of the gas station to experiment with short-range drone deliveries.