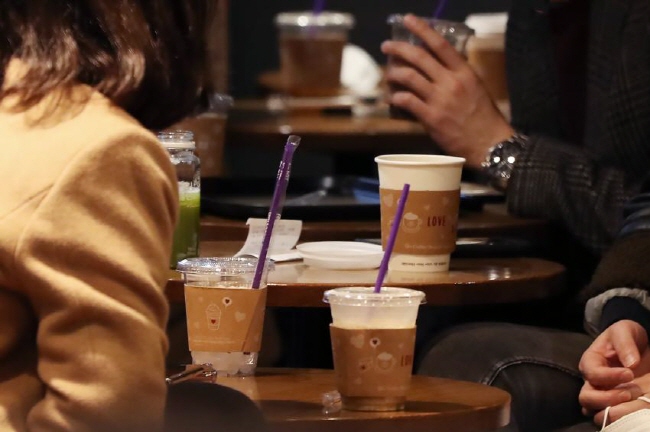 Customers have coffee in disposable cups at a Seoul coffee shop on Feb. 25, 2020, as the Seoul city government temporarily allowed disposable products at cafes and restaurants amid the spread of the new coronavirus in the country. (Yonhap)

SEOUL, March 2 (Korea Bizwire) — The Seoul Metropolitan Government (SMG) has decided to temporarily lift restrictions on the use of disposable plastic and car access to public agencies after the alert level for coronavirus was raised to red last week.

The Central Disaster and Safety Countermeasures Headquarters and other agencies made the decision to raise the alert level last Tuesday as part of efforts to combat the COVID-19 outbreak.

The city government announced that it will lift restrictions on the use of disposable plastic at food vendors in accordance with current legislation that allows for such measures if an epidemic alert level exceeds orange (level 3).

The SMG, as per instructions from the Ministry of Environment, ordered all food vendors in 25 districts to ensure a sanitized environment, and temporarily allowed the use of disposable products at coffee shops and other restaurants.

In addition, restriction on car access to public agencies, normally based on license plate numbers, has been lifted temporarily in all six capital and metropolitan cities as well as the Greater Seoul Metropolitan Area last Tuesday to combat the coronavirus outbreak and minimize its spread among local communities.

The car access restriction at public agencies was originally introduced for authorities to take the lead in fighting peaking fine dust levels from December to March every year.

The Central Disaster and Safety Countermeasures Headquarters also designated 91 medical centers as ‘safe hospitals’ to alleviate concerns among citizens who are worried about infection at hospitals.

‘Safe hospitals’ have separate wards for respiratory and non-respiratory diseases to cut off any risk of COVID-19 infection, with strict restrictions on visitor access and complete protection for medical staff.