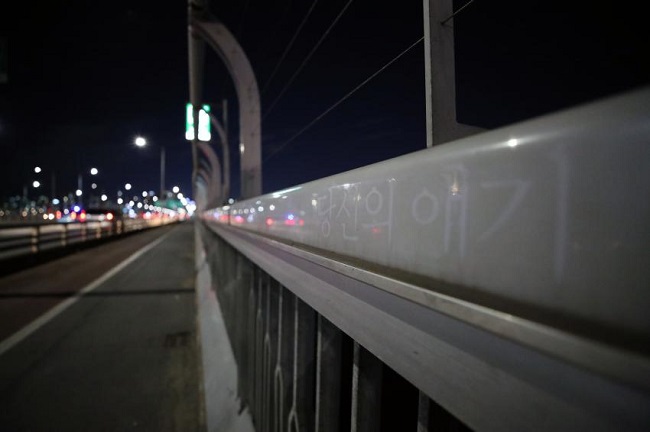 Mapo Bridge over Seoul’s Han River, which is a well-known suicide spot. (Yonhap)

SEOUL, July 31 (Korea Bizwire) — The Seoul Metropolitan Government has removed the suicide prevention message written by late Seoul Mayor Park Won-soon and posted on the guardrails of the Hangang Bridge, one of the bridges connecting the north and south of Seoul.

This move came after civil complaints were filed about the uncomfortable truth that the late mayor who wrote the suicide prevention message killed himself.

Officials at the city government said that civil complaints were filed on Monday asking local authorities to get rid of the suicide prevention message written by the late Seoul mayor, and that the messages had been removed on the same day.

In 2013, Park posted the suicide prevention message on the guardrails of the Hangang Bridge on the Han River.

He was not alone. Other celebrities such as world-renowned soprano Sumi Jo, famous actor Ha Jung-woo and singer Lee Hyo-ri also posted suicide prevention messages there.

“We judged that it’s not desirable to leave the message as it was, particularly considering the special situation that the writer committed a suicide. We have already been removing such messages amid complaints that they lack any effect,” the city government said.

Instead, installing higher fences turned out to be more effective in reducing the number of suicide attempts.