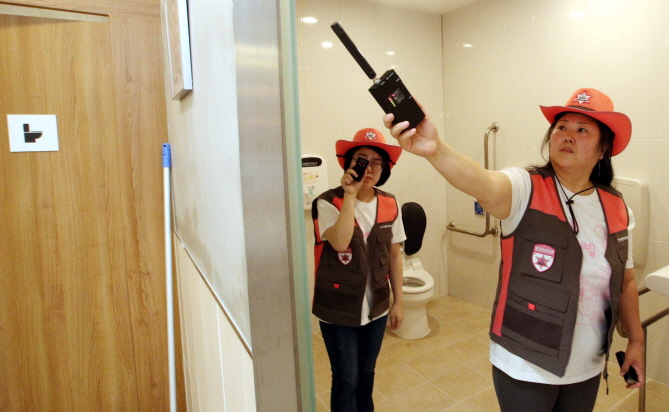 A pair of government inspectors checking a public restroom at the Seocho-gu District Office in Seoul for hidden cameras on Aug. 30, 2018. (image: Yonhap)

SEOUL, Sept. 2 (Korea Bizwire) — The Seoul city government announced an ambitious plan Sunday to carry out daily inspections of all public restrooms in the city for hidden cameras that are used for crimes against women.

This means each restroom is only inspected once every month or even at longer intervals, according to the city government.

Under the new plan, the government will mobilize some 8,000 other workers currently employed to maintain and upkeep public restrooms and have them daily check the facilities they are already tasked to upkeep.

This translates into each government employee inspecting about 2.5 public restrooms each day, it said.

Hidden camera crimes jumped nearly threefold in just five years from about 2,400 cases in 2012 to 6,470 last year, according to earlier reports.

However, the 50 government employees specifically tasked with exposing hidden cameras have found none over the past two years, the government noted.

The city government will also designate some 1,000 public restrooms that are especially prone to hidden camera crimes and have them checked more frequently, it said.