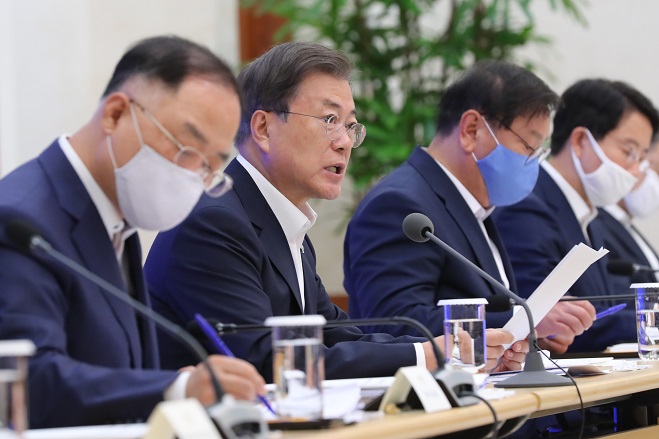 SEJONG, June 1 (Korea Bizwire) — South Korea’s economic policies to deal with the post-pandemic recovery will be backed by its “Korean-version New Deal” project that will help the nation create new growth engines and jobs once the COVID-19 outbreak wanes.

The project is one of the key components in the country’s economic policy for the second half of this year, as it strives to cushion the economic blow from the pandemic and hasten the economic recovery, according to the Ministry of Economy and Finance.

By 2022, the government will invest 31.3 trillion won (US$25.3 billion) into digital and green technologies.

Under the project, the government will build nationwide 5G networks and train 100,000 professionals in artificial intelligence. Wireless internet networks will be built in remote areas.

The project will promote the renewable energy industry and increase energy self-sufficiency. Efforts will be made for public facilities to use green technology.

Also, the project is aimed at establishing social safety nets for all people and creating 550,000 jobs, the ministry said in a statement.

The project is expected to create jobs for the nation’s transition to a digital economy, Bang said.

The ministry said it expects the nation’s economy to grow 0.1 percent this year, a sharp downgrade from a 2.4 percent expansion it had forecast last December.

That was a more upbeat assessment than that of the Bank of Korea, which projected Asia’s fourth-largest economy to contract 0.2 percent this year.

The ministry is set to unveil the third extra budget as it will seek to encourage firms to boost investment and protect the job market.

“Top priority will be placed on invigorating investment to help boost economic growth and strengthen growth potential,” the ministry said in a statement, adding the government will seek “bold deregulation” this year to spur corporate investment. 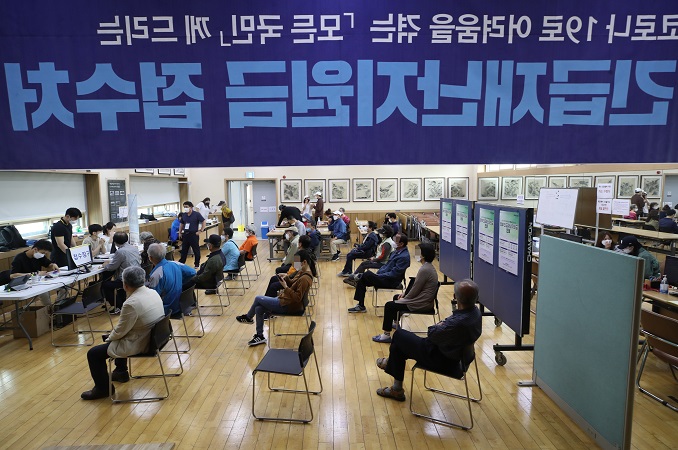 Residents wait while keeping a distance from each other to apply for emergency disaster relief funds at a community center in Seoul on May 18, 2020. (Yonhap)

South Korea has pledged stimulus packages worth 250 trillion won, or 13 percent of its gross domestic product, to cushion the economic blow from the pandemic.

South Korea’s export-reliant economy has taken a big hit as the nation’s two biggest trading partners — China and the United States — have wrestled with the virus, which originated in China and has hit the U.S. hardest.

The country’s exports tumbled 24.3 percent on-year to $36.9 billion in April, also suffering a trade deficit of $950 million in April and snapping its 98 straight months of having more exports than imports.

The ministry expected exports to fall 8 percent this year, compared with a 10.4 percent contraction last year.

The 2020 current account surplus is forecast to narrow to $58 billion this year from last year’s surplus of $60 billion.

Last week, the central bank slashed its policy rate by a quarter percentage point to a record low of 0.5 percent.

BOK Gov. Lee Ju-yeol said the bank will step up its purchase of government bonds to make up the cost of massive stimulus packages.

Lee noted the possibility of an additional cut to the growth estimate depending on the development of the virus outbreak.

“Because the uncertainties regarding the spread of COVID-19 and its impact continue to remain very high, we cannot but review conditions based on assumptions about the future course of COVID-19,” Lee said.

The nation’s economy shrank 1.4 percent on-quarter in the first quarter of this year, marking the sharpest quarterly contraction since the last three months of 2008.

While the first-quarter economic contraction was led by private consumption, which shrank 6.4 percent on-year, exports are likely to hit a new low in the second quarter.

“South Korea’s dependency on trade makes it particularly vulnerable to the shock from the sharp slump in global demand conditions as the outbreak spread rapidly across most countries,” Moody’s Analytics said in a report.

“Although a gradual resumption in China’s production is a positive development, the U.S. has yet to recover and large economies, including Russia and India, are now in the eye of the storm, factors that are expected to weigh unfavorably on South Korea’s exporters,” it said.