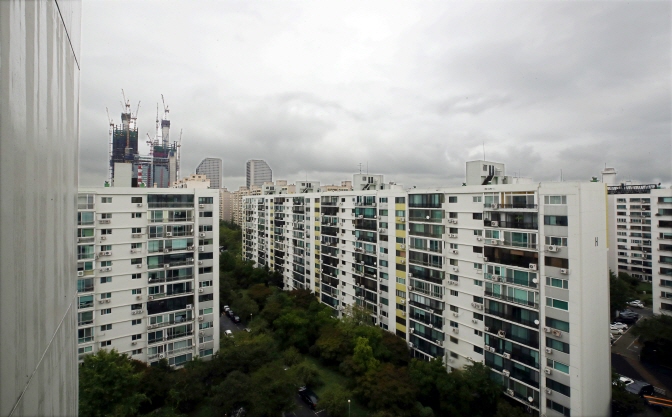 The new plan will be able to prevent cases where redevelopment projects are turned down by Seoul’s urban planning committee since the city will be participating at the start of the planning process. (Yonhap)

The plan involves the city providing guidelines on the number of floors, design, and other major construction features to the private sector before it begins making its rough sketch for redevelopment or reconstruction projects.

The plan will be tested on four apartment complexes next month, where Seoul’s urban planning committee will submit comprehensive guidelines for each complex before allowing private construction companies to begin developing their redevelopment plan.

Until now, the private sector has been responsible for setting redevelopment or reconstruction plans that were then submitted to Seoul’s urban planning committee for review.

What the city is trying to do from now on is to intervene in the redevelopment and reconstruction process from the very start.

What Seoul will offer as guidelines to the private sector will include height, floor space, historical and cultural resemblance, landscape, type of residents, and even climate change.

“For apartment complexes located in hilly areas, we can have the buildings reconstructed such that there are some differences in the height of each building, instead of installing revetments or walls,” said city officials.

“For complexes near subway stations or transportation hubs, we can turn them into multi-purpose residences with availability for commerce and business.”

The new plan will be able to prevent cases where redevelopment projects are turned down by Seoul’s urban planning committee since the city will be participating at the start of the planning process.

Also, the plan is expected to significantly reduce the time need to pass the committee.

Similar mechanisms are already at work in Shanghai, New York, Boston, and other major cities worldwide, the city said.

“Children in Barcelona grow up looking at Gaudi’s impressive architectural design, while our kids look at nothing but matchbox-shaped buildings,” said Jin.

“Even for the creativity and imagination for our children, we have to reinvent Seoul’s landscape over the next 100 years through immaculate urban planning.”