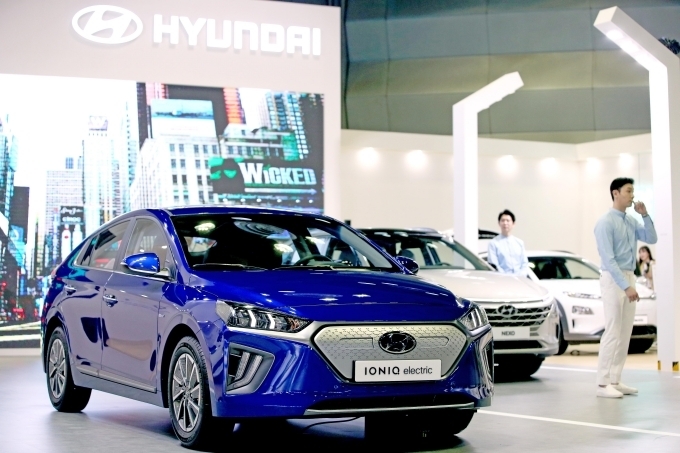 A Hyundai Motor Co. Ioniq electric vehicle at an exhibition in Seoul on May 2, 2019. (Yonhap)

SEJONG, Sept. 1 (Korea Bizwire) — South Korea will offer more than 1 trillion won (US$827 million) in subsidies to people who buy electric and hydrogen fuel-cell electric vehicles next year to promote the use of eco-friendly vehicles that do not emit the greenhouse gases largely responsible for global warming, an official said Sunday.

The government has set aside 738.2 billion won to make sure that the number of electric vehicles on the road would rise by 71,000 in 2020, nearly doubling from a rise of 43,000 units in 2019, according to the finance ministry official.

An individual who buys an electric car can receive 8 million won in subsidy from the central government in 2010, while the government will offer 22.5 million won to those who buy a hydrogen fuel-cell electric vehicle, according to the ministry.

South Korea has been seeking to go green and boost the hydrogen economy as a new growth engine.

The subsidies will also be used in expanding charging stations for electric cars and hydrogen fuel cell electric vehicles.