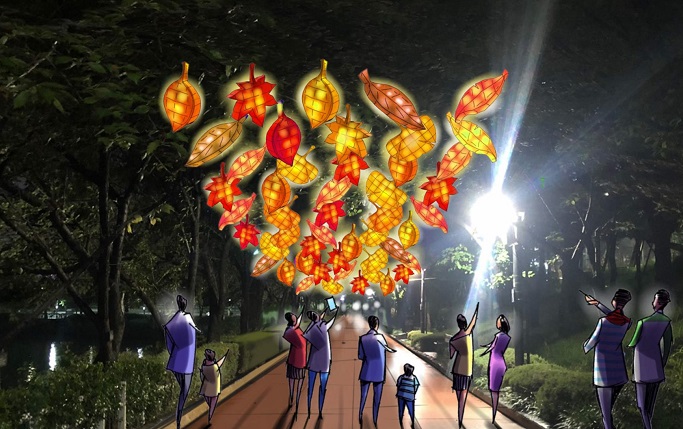 This image, provided by the Seoul metropolitan government, illustrates the 2020 Seoul Lantern Festival to be held in Jamsil, southern Seoul.

The venue was moved from Cheonggye Stream in central Seoul to four neighborhoods — Jamsil, Itaewon, Dongdaemun and Myeongdong — that saw a sharp decline in tourism this year, the government said in a press release.

“We hope that through this event, our citizens who are exhausted from COVID-19 will receive comfort and that businesses in the special tourism zones will overcome this difficult time,” Joo Yong-tae, a city official overseeing tourism, said.

Each zone will showcase lanterns made from traditional mulberry paper and featuring the neighborhood’s distinct characteristics.

Colorful lanterns are displayed on Cheonggye Stream running through downtown Seoul on Oct. 31, 2019, on the eve of the opening of the 2019 Seoul Lantern Festival. (Yonhap)

Jamsil will decorate a walking trail with lanterns shaped like maple and gingko leaves. Itaewon will feature lanterns resembling the main characters of the popular webtoon “Itaewon Class.”

Dongdaemun’s display will revolve around the themes of shopping and its historical gate, Heunginjimun.

Myeongdong will exhibit a large Christmas tree lantern, as well as “Merli,” a character based on Singapore’s mythical creature Merlion, in celebration of the 45th anniversary of the establishment of diplomatic relations between South Korea and Singapore.

The city government said it will send 53 officials to the four sites to help prevent the spread of the coronavirus during the festival.

It added that concerns about crowding led to its decision to spread out the festival across four venues, instead of holding it at Cheonggye Stream, which has drawn more than 2.5 million visitors to the annual event every year since 2009.