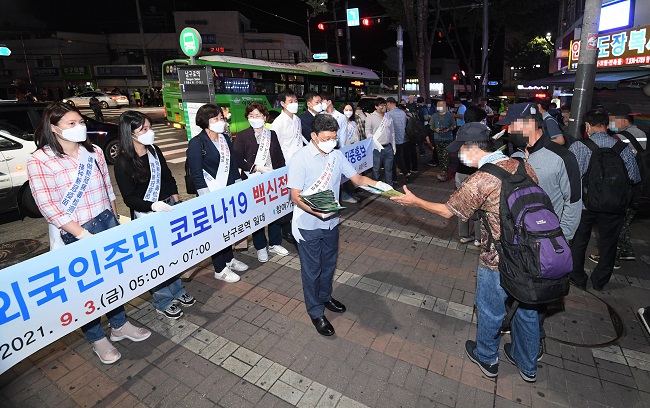 This photo, provided by the Seoul city government, shows its officials conducting a COVID-19 vaccination campaign on a street in the southwestern ward of Guro on Sept. 3, 2021.

Foreigners took up 9.2 percent of Seoul’s new infections in August, up 2.9 percentage points from the corresponding rate of 6.3 percent in July, according to the city government.

The figures are much higher than the 2.45 percent portion foreign nationals represent in Seoul’s total population. As of last year, the city had 242,623 registered foreign residents.

According to the city government, the COVID-19 vaccination rate in the foreign community has remained stagnant due largely to a more complicated vaccine reservation process for foreigners and language barriers.

To buck the trend, the city government has conducted joint campaigns with ward offices and police to encourage vaccination in foreigner-concentrated neighborhoods, such as Yongsan and Guro, and will launch similar activities down the road.

The city, in particular, plans to distribute brochures in foreign languages, informing people of different nationalities about the COVID-19 vaccine reservation process.

The city will also urge the foreign community, through campaign posters and video clips, to get pre-emptive coronavirus tests in a bid to curb the spread of the virus, it added.

Information on the coronavirus pandemic and the local antivirus measures are available in 13 languages at the Seoul Global Center’s website, including English, Chinese and Russian.