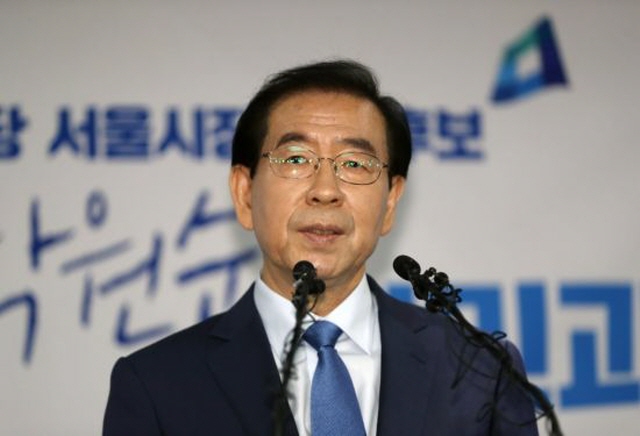 Seoul Mayor Park Won-soon declares his bid for a third term, in the June local elections, during a press conference at the ruling Democratic Party’s headquarters in Seoul on April 12, 2018. (image: Yonhap)

Whoever wins the primary will face off against former presidential candidate Ahn Cheol-soo of the minor Bareunmirae Party, and former Gyeoggi Province Gov. Kim Moon-soo of the main opposition Liberty Korea Party.

Announcing his election bid, Park vowed to make the capital city a place where “ordinary people can lead a happy life,” cataloguing a series of his policy achievements, including offering free school meals, halving tuition fees at a city-run university and refurbishing old districts.

“Now, Seoul will embark on a new challenge,” he said. “Based on my experience and capability that I have built through six years of managing the city, I will enhance the quality of life for citizens and ensure that the spirits of the candlelit square will take root in our democracy.”

Park was referring to Gwanghwamun Square in central Seoul, the venue for the massive public protests from late 2016 to early last year, which led to the dismissal of corruption-tainted former President Park Geun-hye.

Park also pledged to strengthen economic and cultural cooperation and exchanges with the North Korean capital city of Pyongyang, carry out a project to stamp out sexual violence and provide better support for the disabled and senior citizens.

Rival parties have been striving to clinch a win in the race for Seoul mayor, a post seen as a springboard to the presidency — or at least an opportunity to garner political recognition.

Running the country’s largest metropolis, with a population of nearly 10 million, and an annual budget of some 30 trillion won (US$28.4 billion), has often been compared to leading a state government.