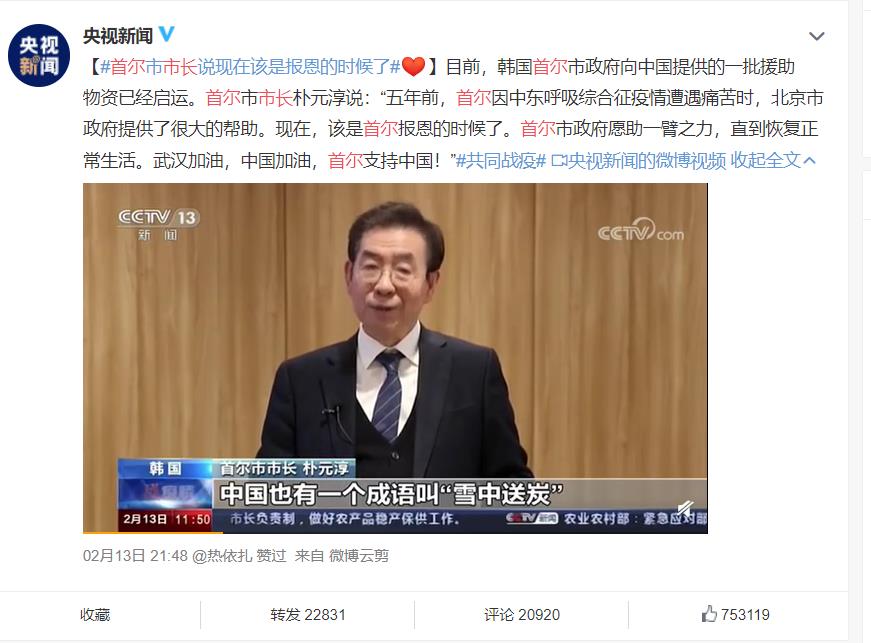 SEOUL, Feb. 17 (Korea Bizwire) — In the wake of the coronavirus outbreak, Seoul Mayor Park Won-soon has sent a message of support to China in Chinese, making headlines on Chinese social media.

“There is a saying in Korea that a friend who helps in times of need is a true friend,” Park said in the video.

“When Seoul suffered from the Middle East Respiratory Syndrome five years ago, Beijing sent special envoys and tourists to help us greatly,” he continued in the video.

Saying it is now time for Seoul to help, he said in Chinese, “You can do it Wuhan! Hang in there, China! Seoul supports China,” he added, wrapping up the video.

The video made headlines when it surpassed 300 million views on Weibo, China’s version of Twitter, and China’s largest social media service.

In particular, a Korean politician cheering for China in Chinese has drawn keen attention among Chinese netizens.

The related video was hot on Weibo as well as the short-form video sharing application TikTok, with more than 10 million views.

It was also reported in China’s state-run media, including CCTV and the People’s Daily.

Chinese Internet users expressed their gratitude by commenting, “Thank you Seoul”, “Seoul Mayor sent a supporting message to China in person in Chinese” and “Korea is the best.”