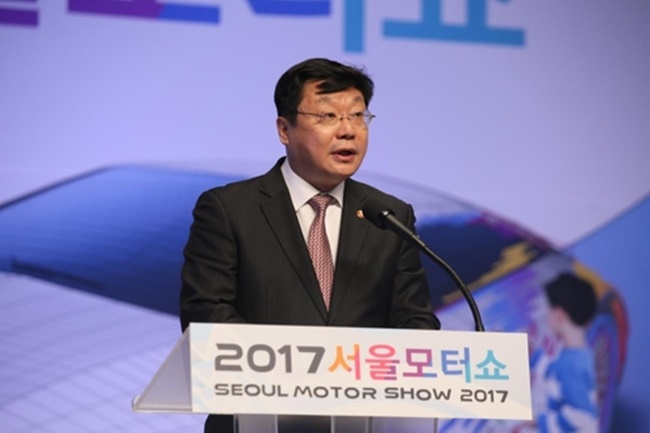 In this photo taken on March 31, 2017, Trade, Industry and Energy Minister Joo Hyung-hwan delivers an opening speech for the Seoul Motor Seoul that runs through April 9 at KINTEX in Ilsan, near Seoul. (Image: Yonhap)

SEOUL, March 31 (Korea Bizwire) – The 2017 Seoul Motor Show on Friday kicked off its 10-day run with visitors getting a chance to check out upcoming models and new auto-related technologies centered on green and autonomous vehicles.

Under the slogan “Design the Future, Enjoy the Moment,” the 11th motor show is showcasing about 300 models at this year’s event held at the KINTEX exhibition hall in Ilsan, just northwest of Seoul.

“This year, visitors will have more opportunities to experience future technologies in environment-friendly and self-driving cars through test rides,” Park Young-seok, a spokesman for the Organizing Committee for Seoul Motor Show, said.’

In his opening speech for the biennial event, Joo Hyung-hwan, the minister of Trade, Industry and Energy said the government will make further efforts to promote future oriented cars that are cleaner to run and enhance driver convenience.

“The government will offer the world’s highest-level of incentives for electric car purchases and establish more charging stations, with a goal to make electric cars account for 1 percent of total new car sales for this year,” he said.

South Korea is a 1.8 million automobile market where the demand for eco-friendly and technologically advanced vehicles is growing among consumers.

Currently, the central government offers 14 million won (US$12,500) in subsidies to the buyer of an electric vehicle. When subsidies given by provincial governments are combined, the prices of EVs are more affordable for customers.

On the first day of the 10-day motor show, the most attention-grabbing new cars were the Stinger sports sedan unveiled by Kia Motors Corp. and the G4 Rexton sport-utility vehicle shown by SsangYong Motor Co. 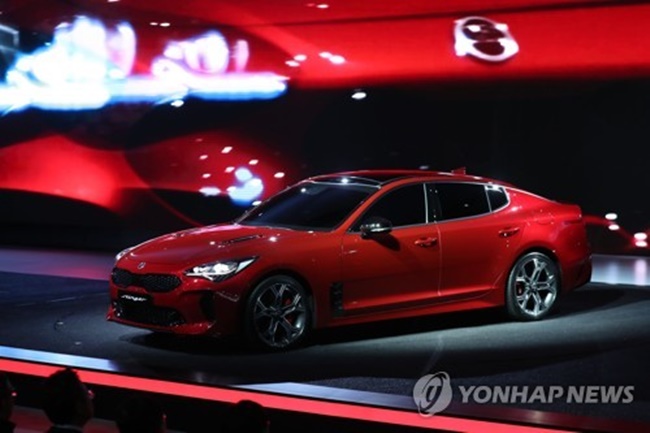 Kia unveiled its Audi A4 challenger, the Stinger, for the first time in Asia, following its debut in global motor shows in Geneva and Detroit this year.

In the domestic market, the all-wheel drive Stinger will be the carmaker’s first sedan with an independent badge that does not have the KIA logo. But it will be available under the KIA brand in overseas markets, said the company.’

SsangYong Motor released its flagship G4 Rexton to improve its brand image by adding the “premium model” to its SUV-focused lineup.

Anand Mahindra, executive chairman of Mahindra & Mahindra Ltd., flew to the show from India to show that the Indian parent company will be fully behind SsangYong’s drive to further beef up its lineup in coming years. 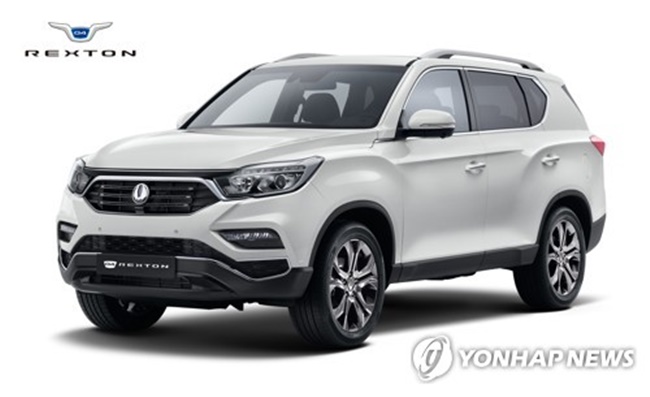 SsangYong said Thursday it will invest US$1 billion over the next four years to beef up its SUV lineup with quality models.

Moreover, the chairman said Mahindra and SsangYong will jointly develop a high-end electric vehicle by 2019 to gain a share in the U.S. and Chinese EV markets in the long term.

Hyundai showcased a gasoline hybrid model based on the new Grandeur large-size sedan in a move to diversify choices for consumers. It also showed off its semi-autonomous vehicle based on the Ioniq plug-in hybrid.

Other carmakers focused on promoting their luxury and high-performance cars or fuel-efficient models.

BMW and Mercedes-Benz stood out by debuting the most luxurious M760Li xDrive sedan and the Mercedes-AMG GT gasoline hybrid concept, respectively, in their Asian premieres.

Mercedes-Benz Korea President CEO Dimitris Psillakis said the German carmaker will “continue investing in the Korean market, not only showing nice and useful products but also investing a lot in the infrastructure and customer services.”
South Korea is among the luxury carmaker’s 10 biggest markets.

One out of five vehicles displayed in the show were eco-friendly models, reflecting the market’s growing demand for low emission cars, the organizing committee said.

Carmakers and parts makers were not alone in showing off their advanced technologies involving high-end cars.

Naver, the operator of Korea’s most popular search engine, took part in the auto show for the first time. It unveiled its latest self-driving car and demonstrated how it collects required data to permit a car to move on the road without a driver.’

In 2016, the company saw its sales jump 36 percent in South Korea to 1,545 units from 1,137 a year earlier on robust demand for its products despite slowing overall demand in the 370,000-unit-a-year commercial vehicle market.