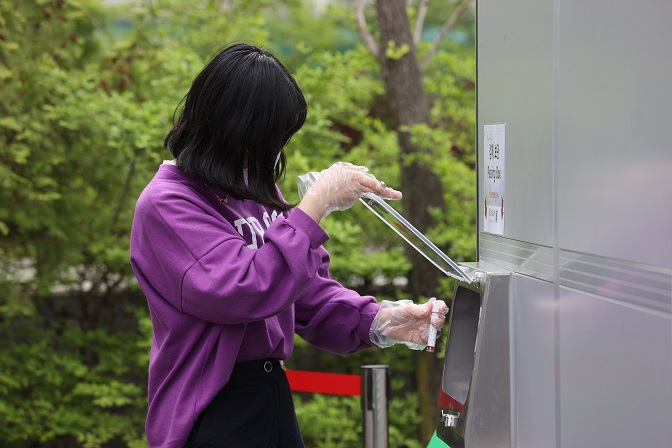 An official stores a sample for a coronavirus rapid molecular test at Seoul National University on April 23, 2021. (Yonhap)

SEOUL, April 23 (Korea Bizwire) — Seoul National University said Friday it will run weekly coronavirus testing that produces results in about one hour as part of efforts to detect infections quickly and expand in-person classes on campus.

It is the first such move by one of the country’s higher education institutions, which have been reeling from declining enrollment and students’ protest over pricey tuition and prolonged online classes.

The move comes amid concerns over a renewed spike in COVID-19 cases. South Korea reported 797 new cases on Friday, the most since early January.

The school, one of the country’s most prestigious universities, set up a testing center on campus Thursday that will offer rapid molecular tests based on the technology called Loop Mediated Isothermal Amplification (LAMP).

According to the school, the test is highly sensitive even for a small amount of the virus and is effective as it produces speedy results, with samples being processed on site.

After two days of trial on Thursday and Friday, the school will officially launch the program on Monday for approximately 2,700 graduate students, faculty members and officials from its science department. For those who sign up, weekly testing will be available. 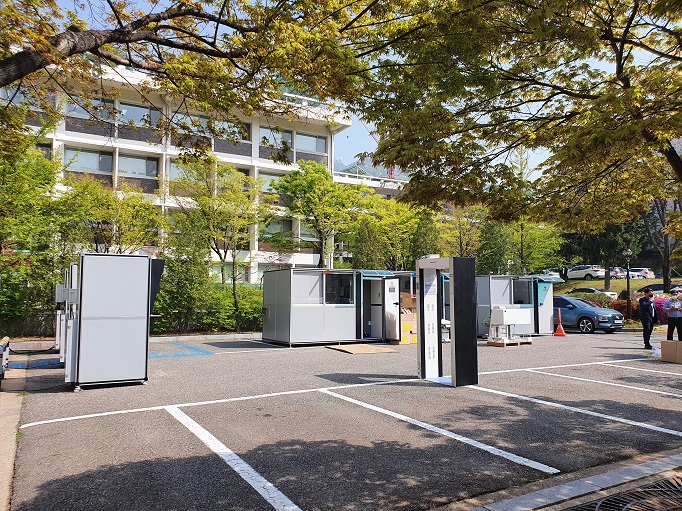 Temporary structures are set up in a parking lot of the science department of Seoul National University to process samples for COVID-19 testing on April 22, 2021. (Yonhap)

The measure, the school said, is aimed at assuring students and teachers that the campus is a safe place to go about their lives and start resuming their pre-pandemic activities.

It noted, however, that the rapid test should remain as a supporting measure, and those with positive test results from the school’s test center will be referred to a nearby public health center to receive more accurate laboratory virus tests.

“We thought the school needed a gradual exit plan to normalize its operations,” Lee Hyun-sook, associate dean of the university’s college of natural science, said, adding that “testing the same group on a regular basis” came up as one of the viable options.

“We believe, in the second half, the school should be different from last year,” she said.

On his visit to the testing site, Oh Se-jung, the university’s president, said he expected the rapid testing to expand to other departments, such as colleges of music and sports where in-person instruction remains crucial.

“I hope the trial at SNU lays the groundwork for similar attempts to be introduced in other institutions,” he said.